How light influences the taste of wine
Frank Kämmer

The colour of light can influence whether or not food appears palatable to us. The use of this effect is particularly popular when lighting meat counters in supermarkets. However, a study conducted by the University of Mainz in collaboration with a Rheingau vineyard has shown that ambient light alone can also influence the flavour of wine.

It is a well-known fact that the colour of wine can influence how we perceive its taste. For example, a darker red wine is generally perceived as having a more intense flavour than a paler variety. Even if this doesn’t necessarily match with the actual flavour profile. However, the surprising finding of an experiment conducted by scientists in collaboration with the Rheingau vineyard in Allendorf is that the colour of the ambient light alone can also influence the wine’s flavour, regardless of the colour of the wine.

Red light adds berries and cherries into the wine bouquet

The well-known winemaker from Oestrich-Winkel has set up a room on his vineyard with neutral white walls in such a way that the colour of the light inside can be changed. If you taste a glass of a Rheingau Riesling in this neutral light, its flavour, as expected, is one of apricots, peaches and citrus fruits. But if the light is changed to red, suddenly you also detect berries and cherries in the wine bouquet- simply an amazing effect! Even wine connoisseurs and taste experts are taken in by this.

Trial participants are prepared to pay more under red lighting

By contrast, under green lighting, a Riesling suddenly seems to taste noticeably more herbal and tart. And under blue lighting even slightly bitter. So here, the widely accepted fact that the colour of a wine can influence its flavour is clear for all to see. However, the particularly puzzling aspect in this experiment is that the ambient light alone, regardless of the actual colour of the wine, can influence the sense of taste.

To test this, the trial was organised so that the wine was tasted from black glasses to prevent its colour from being identified. In this case also the effect on the overall assessment of the wine was statistically significant. Particularly remarkable was the fact that, under red lighting, the wine was so appealing that participants were prepared to pay over a euro more for a bottle of the Riesling than they were if the wine instead was presented and tasted in green lighting.

How environment also changes the taste of wine

More recent research appears to have uncovered that other environmental factors can influence the taste of food and drink, including wine. Professor Charles Spence won the Nobel Prize for Nutrition for establishing a correlation between the sound of a chip’s crispiness when bitten and our subsequent perception of its taste. Sonic seasoning – music matched to food and drink to accentuate certain flavours and textures – is a big focus in his research. Different pitches of sound appear to affect how sweet or bitter something tastes, for example. Furthermore, Spence refers to the “sensation transfer”, which is the “idea that what one feels about one thing influences how you evaluate something else that is happening at the same time.”

There is some research, he continues, to suggest that playing French music in a restaurant will make it more likely that patrons will order French wine; play classical, and they may spend more on wine. As with the experiments on lighting, sommeliers and other experts, it seems, are not immune to environmental factors like music affecting their tastes. 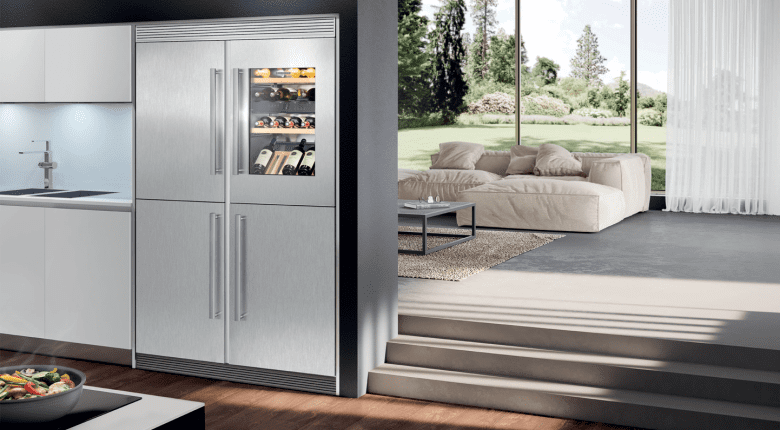 The effects of UV light on wine

Whilst more research will doubtless be carried out on the effects of the environment on our tastes, we already know that UV light can spoil wine. The UV resistant insulated glass doors on Liebherr wine cabinets prevent UV rays from entering the appliance, so this will never be a problem again. So, whether you prefer a glass of Champagne whilst listening to Mozart and bathed in sunlight, or sitting by candlelight enjoying that bottle of red with jazz, you can rest assured that your wine has been stored in the perfect storage environment. The drinking environment? Well, that part’s largely up to you.

We hope you enjoyed this article. Have you noticed whether music, lighting or other environmental factors has affected your taste in wine or other food and drinks? We’d love to hear from you! Get in touch on Facebook, Twitter, Instagram or Pinterest.

A wine storage cabinet or a multi-temperature wine cabinet?

Are all wines suitable for long-term storage?