The square cheese from the supermarket shelf with the Greek flag is well known. But is all feta feta? 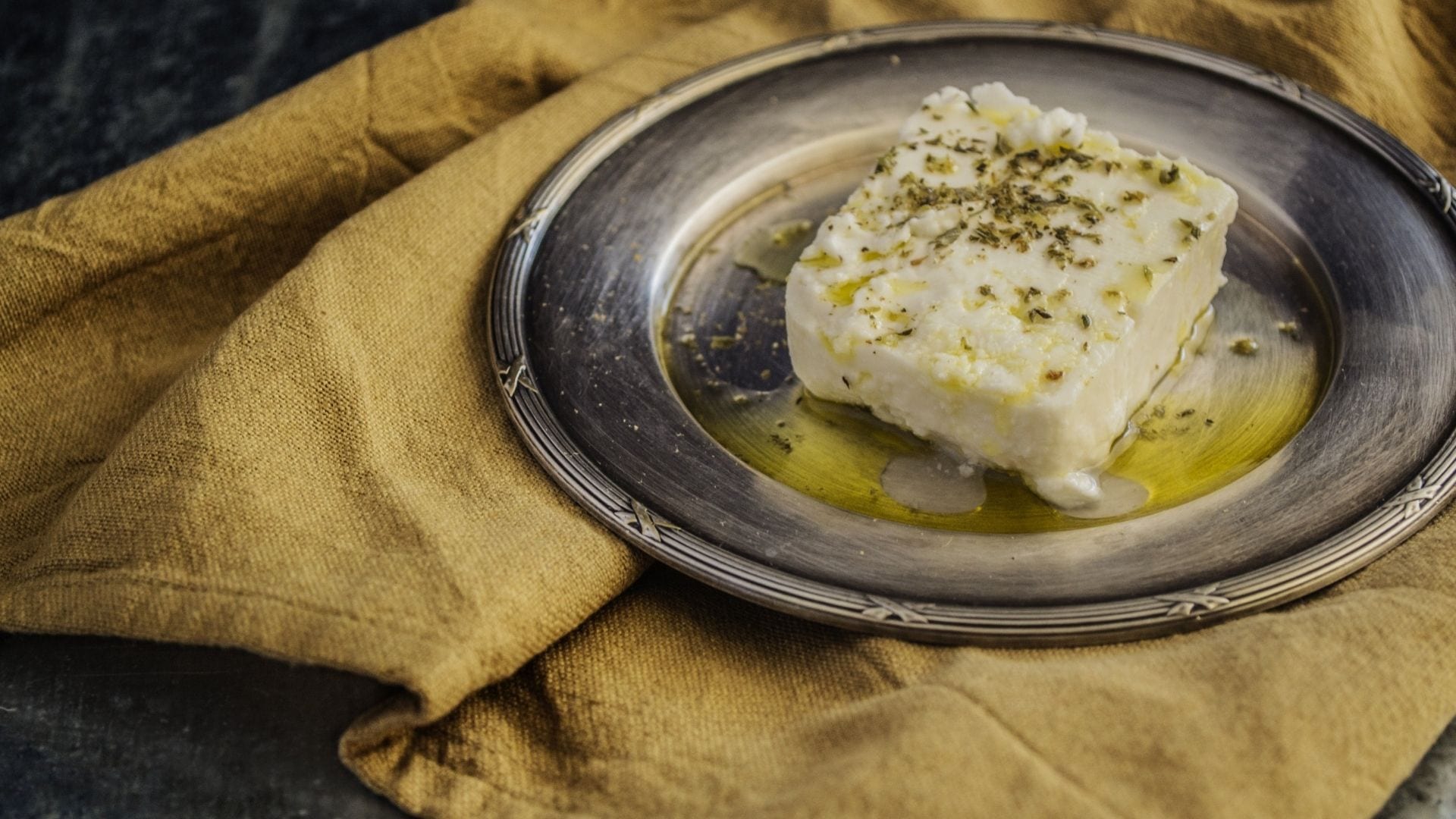 The tangy sheep’s milk cheese from Greece is an important ingredient in many dishes. Especially when the temperatures rise and we crave a little Mediterranean flair, many reach for the traditional feta cheese. Served cold in a crunchy salad or in a crispy crust: This Greek cheese not only tastes incredibly delicious, but also boasts a number of healthy ingredients! Read on to find out what makes the cheese so unique, how you can recognise feta, sheep’s cheese and herder’s cheese and what else you should know as a fan of Mediterranean cuisine.

Feta has been produced for more than 2,000 years and was once considered a “gift from the gods”. Due to the steep landscape and dry climate, Greece has always been an ideal place for keeping goats and sheep. So it did not take long until the salty-sour traditional cheese was created. Today, feta has become one of the most important export products for the country. Because: original feta must come either from the Greek mainland or the island of Lesbos and consist of sheep’s milk and a maximum of 30% goat’s milk . Only in this way does feta receive its protected designation of origin. Until 1997, cheese from other countries, such as Germany or Denmark, was also allowed to be called feta. There, however, it was usually mixed with cow’s milk.

In the supermarket, we’re spoilt for choice: feta, sheep’s cheese or herder’s cheese? Visually, the products are very similar, but inside the packaging there are some subtle differences. For example, the term sheep’s cheese, which is often used as a synonym for feta, includes any cheese made from sheep’s milk. So this does not have to be a cheese that has been aged in brine, but it can be. Thus, just like hard or soft cheese, feta is classified under the generic term sheep’s milk cheese.

As mentioned earlier, original feta is a brined cheese made from Greek sheep’s milk. Some goat’s milk may be added, as sheep sometimes produce more or less milk depending on the season. Externally, you can recognise the original feta by its smooth and firm texture. However, when baked, the cheese becomes wonderfully creamy.

Herder’s or Balkan cheese can also be found on any cheese shelf. The big difference: instead of sheep’s milk, this brined cheese is made from cow’s milk! It is often not made in Greece, but in countries such as Germany and is much cheaper. The taste of this cheese is milder and visually you can tell the difference because of its many small holes. When baked, it forms a crispy brown crust. 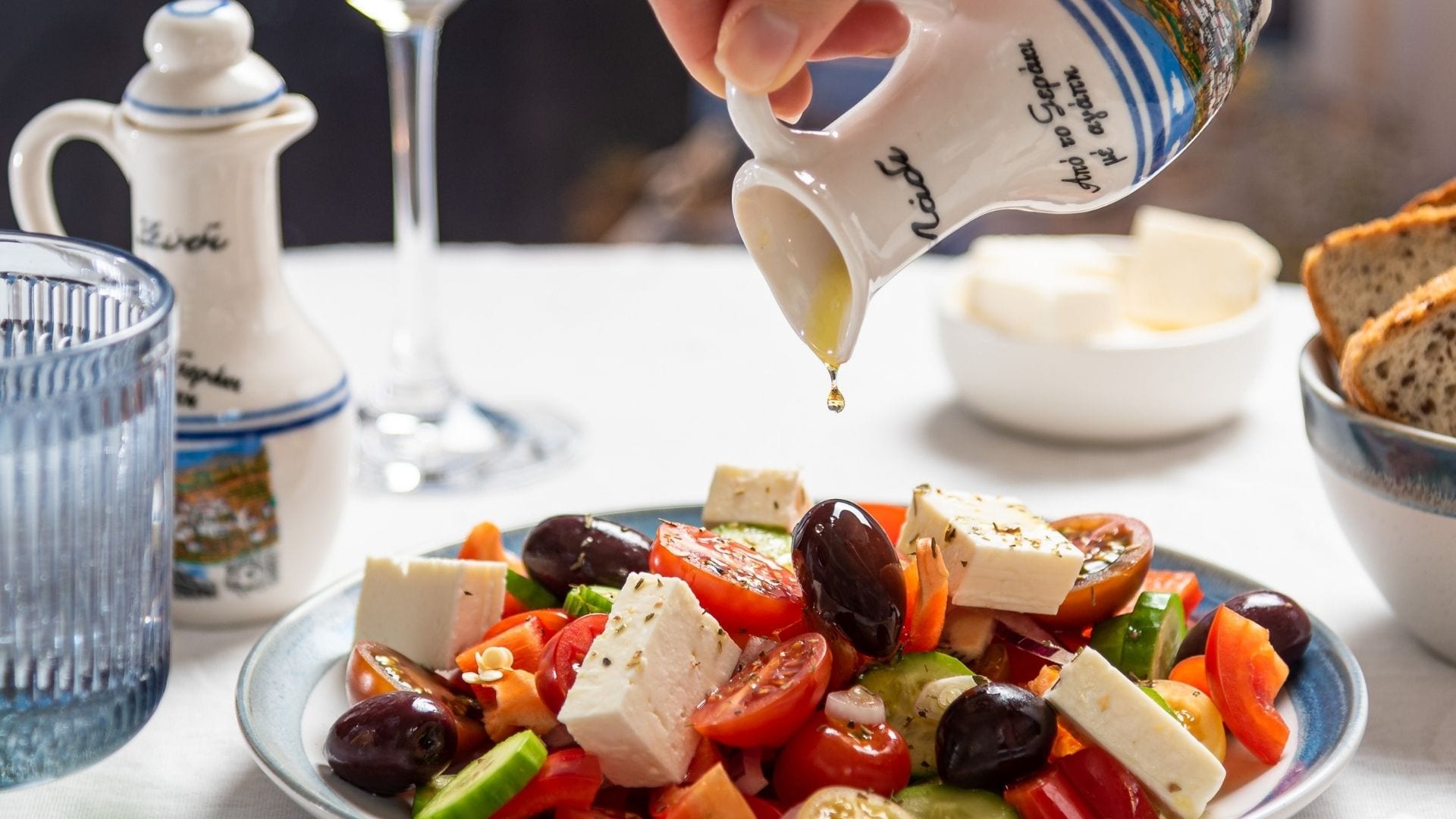 Those who follow a healthy diet, eat a low-carb diet or want to build up muscles can rejoice: with 16 grams of protein per 100 grams, this Greek favourite turns out to be a true protein packer, making it an ideal alternative to meat or fish! And not only that, the cheese also offers plenty of vitamins and minerals. For example, feta contains a quarter of the recommended daily intake of vitamin A, which can be optimally absorbed by the body thanks to the fat present in the cheese. In addition, cheese is a supplier of minerals such as calcium and phosphorus, which keeps our bones and teeth healthy.

However, those who suffer from lactose intolerance should be careful. Small amounts of up to 0.5 grams of lactose are contained in feta. However, as this value is relatively low, many lactose-intolerant people experience little or no problems

Bring a bit of Greece into your own home! Feta is a very versatile product and can be eaten both hot and cold. The classic Greek salad of tomatoes, cucumbers, onions and olives is well known. For that little extra something, sliced or diced feta is mixed into the salad. But feta is also delicious as a warm appetiser. In Mediterranean cuisine, the cheese is often breaded or baked in a small casserole dish with various vegetables such as tomatoes or peppers and then served with crusty baguette.

Using feta in all sorts of one-pot dishes has also become particularly popular. All the ingredients you need for this quick dish are as follows:

Preheat a convection oven to 200 degrees. Chop or press the garlic cloves. Place the uncooked pasta in a baking dish with the tomatoes, garlic and feta. Sprinkle with Italian herbs of your choice and drizzle with a little olive oil. Then pour about 500 ml of water over the whole thing, so that the pasta is completely covered and floats slightly. Bake in the oven for 30-40 minutes. Fresh out of the oven, all you have to do is stir, garnish with fresh basil and enjoy this trendy new dish! 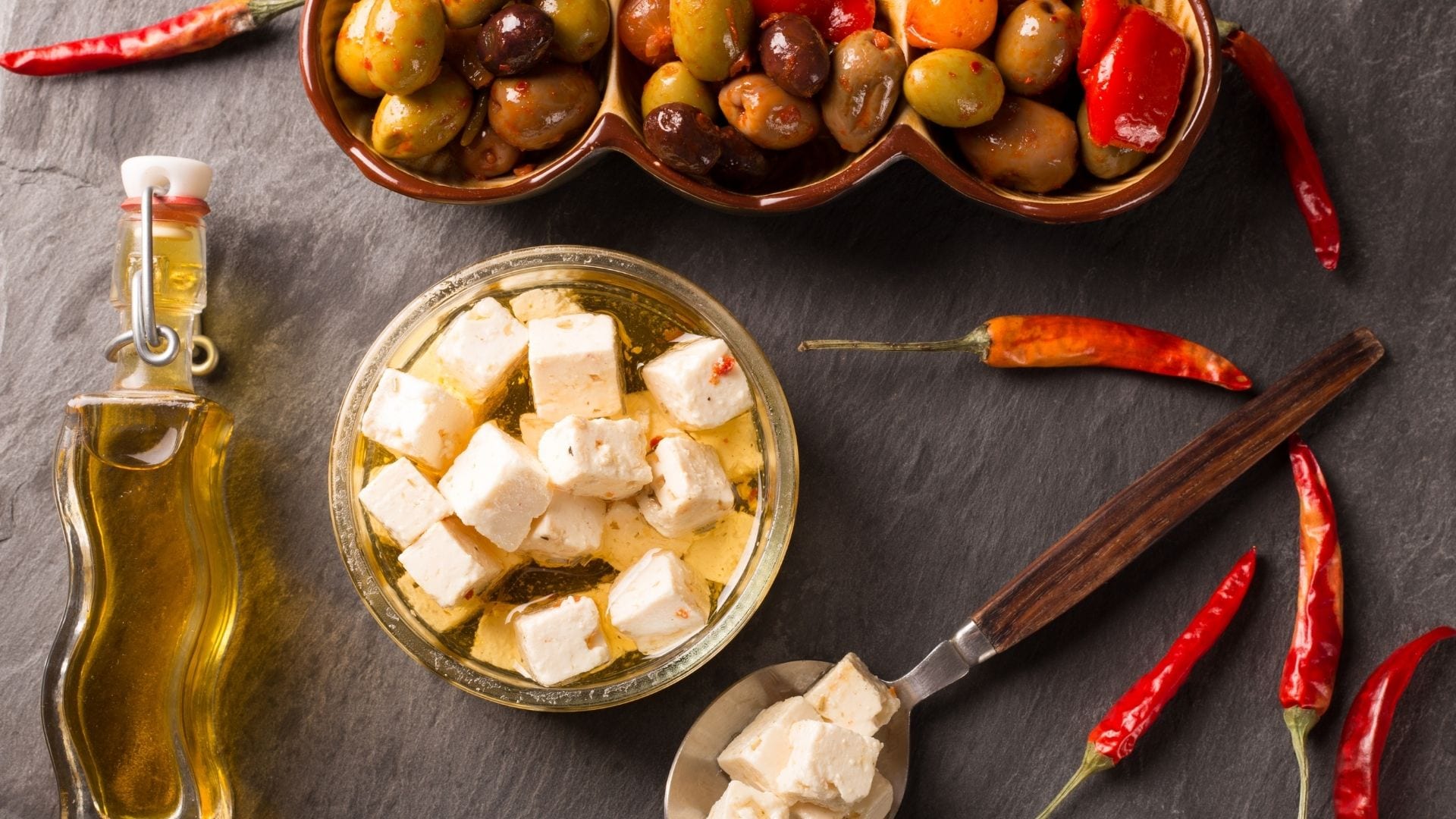 Once the cheese is opened, it quickly turns sour due to contact with oxygen. That’s why we recommend keeping feta in a tightly sealed container. Additionally, you can cover it with a mixture of water and milk in a ratio of 1:1, so you can enjoy the traditional Greek product for even longer. It is also possible to cover it with oil. Feta can be stored for an especially long time thanks to the BioFresh compartment of your Liebherr fridge. At 1 °C, the tangy cheese can be kept for up to 20 days.

Should you Store Chocolate in the Fridge

Cheese: Everything you Need to Know and How to Store it Best

What makes Liebherr’s BlackSteel so unique?