Adding salt to your cooking water is a perfectly normal thing to do. But do these added salt crystals really speed up the cooking process and affect the amount of energy used in the process?

We gently sprinkle salt into the cooking water. But why? Is it purely for taste reasons, or does this flavoursome addition actually help to heat up the water more quickly and also save energy? Find out here whether this well-known myth is true and how table salt affects cooking water and food. Inspiring cooking tips also reveal how salt can help you extract maximum flavour from your food.

Does it make a difference whether you add salt to cold cooking water or leave it until it is boiling? This is a question you have probably pondered on many occasions. Salt enhances dishes as a seasoning, but in fact does a lot more besides. It alters the chemical and physical properties of the cooking liquid and has an effect in a wide range of culinary processes. Whether you’re cooking pasta, pulses or vegetables, or marinading meat, the water-soluble crystals really pack a punch!

The solution is salt in the water

Why does salt actually dissolve in the water? Table salt, also known as cooking salt or common salt, essentially comprises the two elements of sodium and chlorine. In chemistry it is therefore referred to simply as sodium chloride. This involves so-called ionic bonding in which positively charged sodium ions and negatively charged chlorine ions are attracted to each other. The salt crystals we see are created from a large number of such bonds. Without the addition of water, the crystals are firm and very durable. However, once placed in water, they dissolve almost immediately.

Water molecules each consist of two hydrogen atoms and one oxygen atom. As a result of an uneven charge distribution within the molecule, a negative pole is created on the oxygen atom and a positive pole on the hydrogen atom. This makes water a polar liquid and able to dissolve ionic bonds. Salt dissolves by water molecules attaching themselves to the sodium ion with the negative pole and surrounding the chlorine ions with the positive poles. The result is that water pulls the sodium and chlorine ions apart and forms a kind of shell around the elements – the so-called hydration shell. The hotter the water is, the quicker the salt dissolves.

There is also the question of what happens physically when water starts to boil. When water heats up, the individual molecules move faster and faster as a result of the added heat energy. At some point they start to split apart from each other and turn into a gas. The water evaporates. The temperature at which liquid behaves in this way is known as the boiling point. Under normal pressures, the boiling point of water is 100 °C. 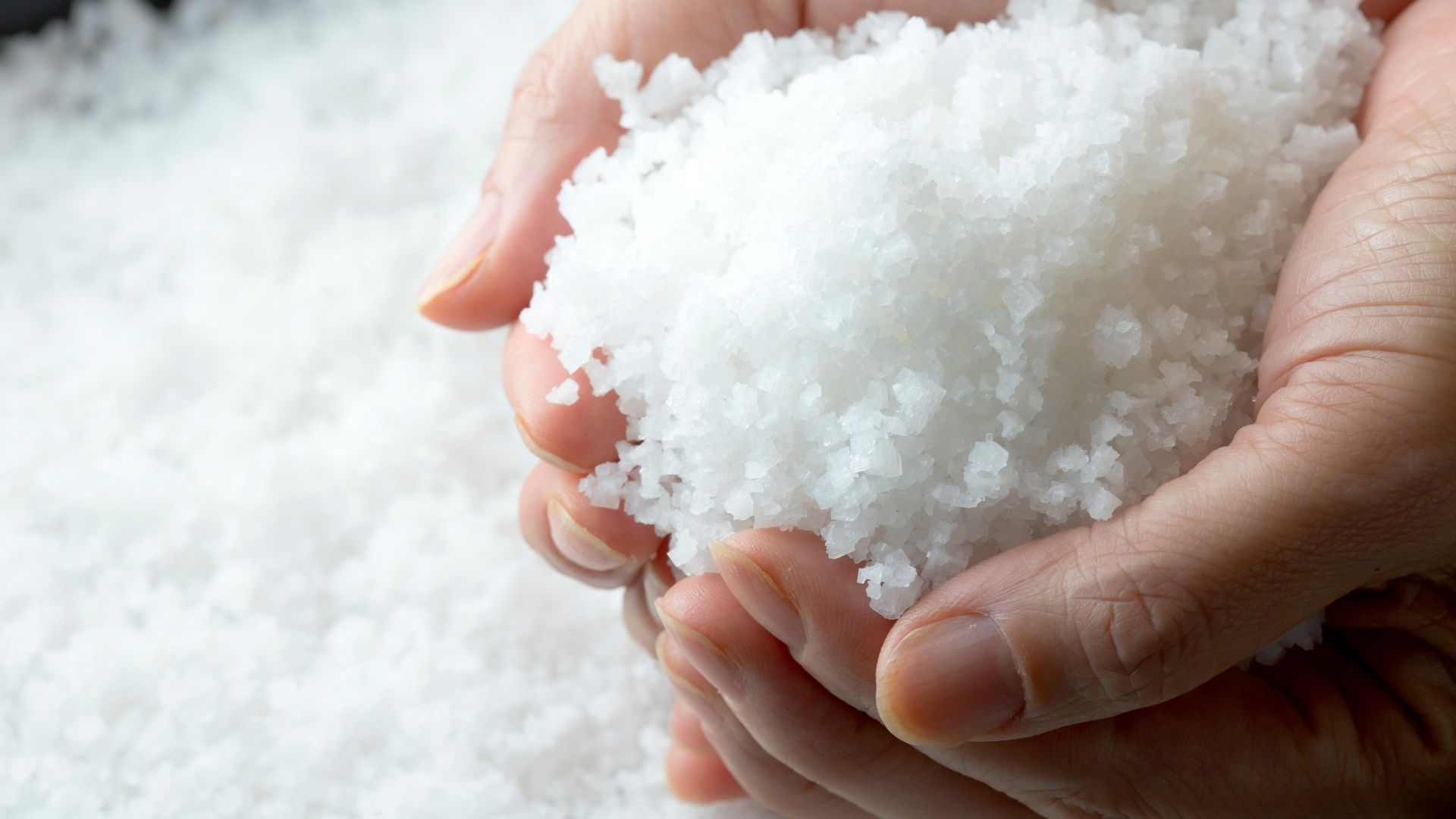 If you sprinkle salt into the cooking water, it cools down to begin with. This is because, to start with, energy is needed for salt’s phase transition from a solid to a liquid by means of the dissolving process. However, the salt solution also needs less energy to heat up. This means that the so-called specific heat capacity of salt-water is lowered. We can conclude from this that heating up salt water is quicker and more energy efficient. But beware, the boiling point of salt-water also increases. Since water is now attached to the cooking salt ions, more energy is needed in order to move the molecules into the gas phase. However, the amounts of salt used at home only increase the boiling point by one or two degrees Celsius.

The lowered specific heat capacity wins out – despite the increased boiling point, heating up salted water saves one percent of energy and a small amount of time. This minimal difference shows, however, that basically it doesn’t matter whether you add salt to cold water or water which is already hot. In fact there is another aspect which tends to favour salt in water which is already boiling. The crystals dissolve more quickly and therefore do not sink to the bottom. On the other hand, in cold water, large amounts of salt sinks to begin with and causes patches of corrosion on the base of the pan. However, this is merely a disadvantage in terms of aesthetics, and does not impact negatively on either function or cooking characteristics.

Salt also affects the food being cooked, just as it does the cooking water itself. In this case, it’s all about osmosis. The water leaves the plant cells in order to balance out the higher salt content on the outside. At the same time, aromas and flavours remain in the food making it taste more aromatic. If vegetables are salted before cooking and left to stand for an hour, the aromas are even more accessible, but they also escape more easily. This is a really useful effect especially when preparing soup. Other processes caused by sodium and chlorine also accelerate the cooking process. For example, the ions weaken the cohesion of the cell walls and cell structures in general. The food becomes soft.

Note: these advantages of salt-water also apply when cooking pulses! Many assume incorrectly that salt extends the cooking time of beans and lentils, etc. This is also often stated on the packaging. However, it now turns out that pulses benefit from immediate salting. But, it’s all very different when it comes adding acids. Vinegar or lemon juice shouldn’t be added until after cooking. When it comes to soups and stews you should add salt in moderation to begin with – it’s better to add salt after cooking than to over salt the food. Since liquid also occasionally evaporates, the salty flavour increases when cooking.

Salting meat can also create interesting and desired results. Whereas with vegetables, the aim is to extract water, drying out the meat in most cases is not the intended aim. This is where patience is required. If you salt meat before roasting, it’s best to do it an hour beforehand and not immediately before. A salty brine consisting of salt and liquid from the meat initially forms and soaks back into the meat over time. In the meantime, the meat’s protein structures are changing in such a way that more liquid is absorbed. The meat becomes juicy and full of flavour and, provided the surface is dry, cooking produces a crust. Check if your Freezer is Working Properly Using the Coin Test

Tips & Tricks: You should always have these foods in your pantry