Plaice – A Delicacy Straight From the Seabed

Plaice: We explain how to recognise the most popular flatfish and how it actually differs from other flatfish such as the flounder or dab. And, of course, there will also be tips on cooking! 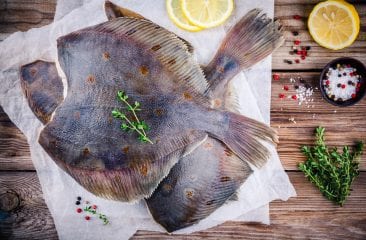 Fish can be classified based on a range of features. According to habitat (freshwater and saltwater fish), fat content (lean, medium fat and fat fish) and according to body shape (round and flat fish). Due to their flat body shape, plaice clearly fall under the flatfish category and are one of 570 flatfish species. Did you know that these species occur throughout the world? However, the largest fishing areas are in Europe, North America and in the North Pacific.

Round flatfish and migrating eyes?

You have to admit, the shape of their body really makes plaice look strange. What’s really surprising is that flatfish are round when they hatch and look just like “normal” fish. It’s not until they begin to grow that the body becomes flatter and one eye migrates over the head next to the other. Most flatfish, and therefore also plaice, are right eyed. Having both eyes on one side of the head enables plaice to see in three dimensions. This is extremely unusual – not only for fish, but for animals in general.

The asymmetrical body structure means that plaice do not swim in an upright position, but instead use their flattened body to hover sideways above the sea bottom. There is barely any current close to the bottom and their method of movement is therefore surprisingly energy efficient. Plaice feed on small animals such as muscles, starfish and worms in the seabed. Their specific body shape means that plaice are able to bury themselves wonderfully well in the sandy seabed. Here they wait for dusk before they go out hunting. The fascinating body shape of the flatfish is therefore superbly well adapted to life right at the bottom.

The eyes of flatfish migrate to one side

Plaice, flounder or even a dab? 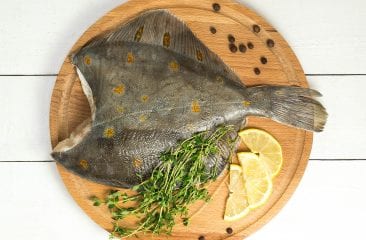 In Europe, plaice is regarded as the most popular flatfish. Its meat is tender and mild and therefore highly sought after among gourmets. Plaice are recognised by their greenish-brown skin with orange-coloured or rust-brown dots. The stomach is white and often covered with dark speckles.

Despite these features, flatfish often cause confusion even among experienced anglers. So how exactly do you distinguish between the three most popular flatfish: plaice, flounders and dabs? We have to admit, telling the three apart really isn’t so simple. One key distinguishing feature is the surface of the fish’s skin. If it is rough like sandpaper, then it is a flounder. By contrast, plaice has a totally smooth skin structure. The dab is the perfect mixture of the two: It is smooth in one direction only, but if you stroke it in the other direction then the surface of the skin is rough.

Plaice, flounder or dab – telling the difference is not so easy

How to tell if fish is fresh So, you can now identify a flounder. How can you tell in the supermarket whether it’s also a fresh flounder? The following are easy and straightforward tips to use the next time you’re shopping for fish.

Make sure that the conditions around the fish counter are sufficiently cool. The fish should preferably be placed on ice but should not be totally covered by ice. When buying fish, you should also trust your senses. Fish is particularly fresh if it hardly smells “fishy”, has red gills and the eyes are clear. In most cases, with pre-cut fillets, you have to rely on your sense of smell only. If the fillet smells sweet, has a strong fishy smell or is dry, then it is no longer fresh.

Where possible the plaice should be used on the day of purchase. In most cases it will keep cooled in a fridge for one day only. You can keep plaice for up to two days in the BioFresh safe and at low temperatures for up to as much as four days in the BioFresh-Plus safe. Flatfish can of course also be frozen. Plaice will keep for up to 12 months when frozen.

Plaice keeps for up to four days at -2 °C in the BioFresh-Plus safe.

Do not be afraid of filleting

If the plaice in your basket is not a pre-prepared plaice fillet, then the filleting is still to do. Clean cutting boards and sharp knives are very important and the best way to approach this. With flatfish, start by scoring across the tail and then hold the fish here firmly. Now you can gently remove the entire skin up to the head.

To detach the fillets, you have to make two incisions: one along the backbone from head to tail and then a second flat cut between the fillet and the backbone. You can separate out the other fillets in the same way.

Early plaice: do they live up to their reputation?

The plaice season runs from May to the end of September. Plaice caught in May are regarded as particularly tasty. This time of the year is just after they have spawned. However, experience has shown that not until June and beyond are they well nourished. They then have a meaty and tasty body. Fish connoisseurs therefore recommend enjoying plaice from the start of June.

Plaice can be prepared in a number of different ways. Including frying, poaching, deep frying or cooking in the oven – the lean meat is very tasty. The fish goes particularly well with butter, parsley, sage, lemon, button mushrooms, cranberries or potatoes.

Some of these ingredients also appear in the best known plaice dish: plaice à la meunière. For this, the fish fillets are tossed in lightly salted flour and then browned in the pan in hot fat. The flour produces a slightly crispy skin. The fillets are then drizzled with butter and served with lemon juice and parsley. Potatoes go well with this. Another cooking idea is available in our FreshMAG recipes: plaice roll-ups with tapenade and risoni. Enjoy your meal!

There are a range of delicious ways to prepare plaice

Ever filleted a plaice yourself, or even caught one yourself? What are your favourite dishes with the tasty flatfish? Leave a comment under this article and share your experiences with us. You can also share the article via Facebook.

Overview of Liebherr at IFA 2017

Should you Store Chocolate in the Fridge

How to Avoid a Bad Smell in your Fridge

What is BioFresh and it’s Benefits?