Sweet potatoes have become increasingly popular in recent years, making appearances and reappearances alongside the likes of tuna and chicken as the uber-healthy go-to food on Instagram meal snaps. Is the sweet potato better than the regular potato, though, and do sweet potatoes actually deserve their ‘Superfood’ status?

Ipomoea batatas, what a wonderful thing…

Sweet potato lives up to its name. The flavour really is sweet and it can still be used in a similar way to the potato. However, it’s not as closely related to potatoes as its name might suggest; it would also be natural to confuse the sweet potato with the yam, which has many similarities.

From South America to Europe

Did you know that, globally, an impressive 105 million tonnes of the large tuber are harvested each year? The largest producer is China, accounting for 80%. Despite the fact that the sweet potato originates from South America, comparatively little batata is cultivated there. For a large part of the world’s population, sweet potatoes are a staple food.

It was the Spaniards who brought the tuber to Europe in the 15th century. Today, therefore, it is not only grown in the tropics and subtropics, but also in Italy, Portugal and Spain. Sweet potatoes are available all year round and are a substitute for potatoes in cases where these cannot be grown. In temperate climates, the main season is late summer and autumn. In the tropics, the tubers grow all year round. In more recent years, sweet potatoes have also been grown in the UK as the appetite for this popular vegetable has grown.

The sweet potato has an impressive nutritional profile. They are a really good source of fibre as well as containing a multitude of vitamins and minerals including iron, calcium, selenium, most B vitamins along with vitamin C. Notably, sweet potatoes are high in an antioxidant known as beta-carotene which converts to vitamin A once consumed. Did you know that Olive oil is believed to help increase your absorption of beta-carotene? Try drizzling some onto sweet potatoes prior to serving. The numerous potential health benefits of beta-carotene have been widely reported and supported by various scientific studies.

There is some evidence to suggest that sweet potatoes may help to lower blood pressure thanks to the potassium it contains. Potassium is believed to help lower blood pressure by balancing out the negative effects of salt. The high fibre content of sweet potatoes (3g per 100g, USDA data) can help with constipation and promote healthy digestion when consumed on a regular basis.

Some studies have also looked at the potential anti-inflammatory effects of purple sweet potatoes. Furthermore, Choline, present in sweet potatoes, is believed to aid sleep, muscle movement, learning, and even memory. Choline is also thought to help to maintain the structure of cellular membranes, aiding in the transmission of nerve impulses, assisting with fat absorption, and may also contribute to a reduction in chronic inflammation.

80g of sweet potato, or about one medium potato, counts as one of your five-a-day, unlike white potato which does not. However, whether sweet potatoes are ‘better’ or healthier than white potatoes is a source of much debate. According to Brian St. Pierre, the relegation of the standard spud and promotion of the sweet potato as some kind of Superfood is a ‘nutritional debate fueled by misinformation’. Whilst sweet potatoes are in a different league when it comes to vitamin A content, the rest of the comparative nutritional data appears to shows little significant difference between the two. 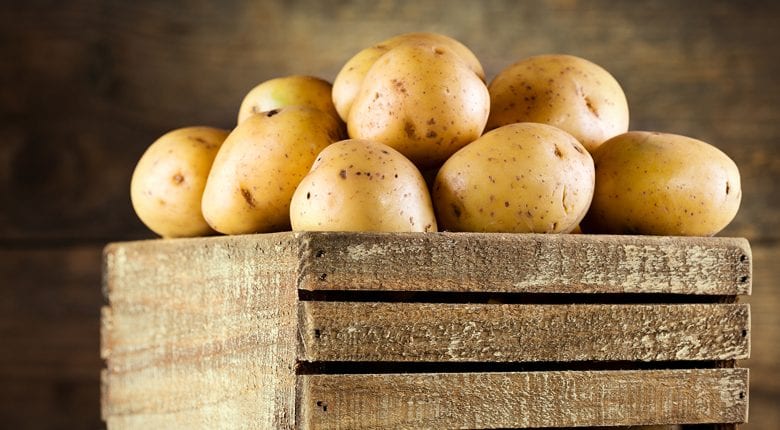 How many calories are there in sweet potatoes?

With an energy content of 108kcal per 100g, sweet potatoes actually tend to be richer in calories compared to other vegetables.

Selecting and storing the sweet potato

Sweet potatoes are now available in almost every supermarket and discount chain. When out shopping, select only firm, bulging and undamaged tubers which feel heavy. Once you are home, you should store the sweet potatoes in a dark, cool and well-ventilated place like a cellar They will keep there for up to 10 days. Do not store sweet potatoes in a fridge under 10°C otherwise unwanted browning will appear. However, higher temperatures of over 16°C will cause the tubers to germinate and spoil prematurely.

When it comes to cooking, sweet potatoes are prepared in a similar way to potatoes and the possibilities are almost endless – boiled, roasted or baked in the oven. The sweet potato is the perfect accompaniment to meat and fish. In the countries where it is grown, it is even used for baking bread. In Germany, it’s not just the tuber which is enjoyed, but also the top leaves which are eaten as a kind of nutrient-rich “spinach”. In addition, the tubers are used for making spirits and brandy as well as for producing starch.

There are also subtle differences in the varieties of sweet potatoes. The orange fleshy varieties are usually sweet and soft after cooking. However, the light- to white-fleshy types are drier, firmer and less sweet when cooked.

We have a few tasty sweet potato recipes to tempt you including the one below for sweet potato crisps. We’ll show you how to make the tasty snack yourself in no time at all. All you need are two large sweet potatoes, frying oil and sea salt.

How to make sweet potato crisps

Batata not only taste delicious when prepared as part of a savoury dish; they can also suitable as a basis for sweet desserts. The yellow-flesh sweet potatoes are particularly ideal for this. The pulp is puréed and used for cakes or muffins. Alternatively, you can slice the sweet potato, dry the slices and then candy them.

One other note about preparation. The sap that’s released from the tuber when cutting and peeling is safe. We hope you enjoyed this article. Please feel free to share it across social media… We’re on Facebook, Instagram, Twitter and Pinterest. Please be advised that this the information in this article does not constitute medical advice. Always consult a medical professional before making any changes to your diet.