Steak: from rib-eye to rump

When many people think of meat, steak is the first thing that comes to mind. It is usually the highest-quality and most delicious cut of meat. But why is that? What makes steak so tender? And what are the differences between the different types such as T-bone, rump steak and entrecôte? Read on to find out the most important facts about steak.

‘Steak’ refers to a slice of unprocessed meat cut across the fibre. Steaks are very low in gristle and have a certain proportion of fat that makes the meat especially aromatic and tender. Particularly high-quality meat can be recognised by its vivid red colour, a tender structure and a fine degree of marbling.

What role do the cattle play?

‘Steak’, when used without qualification, usually refers to beef. The term ‘steak’ may also refer to cuts of other meat such as pork, poultry or lamb. These, however, have to be specifically indicated as such. The quality of a beef steak is strongly dependent on the breed of cattle. The most famous breeds used for steak are Angus, Hereford and Galloway. Their meat has a fine degree of marbling and tastes particularly juicy and tender. The marbling, by the way, is caused by intramuscular fat deposits between the muscle fibres. Something for every taste in steak

In addition to the breed of cattle, other factors are important when it comes to selecting a steak to eat. How do you know if you would like roast beef cut, sirloin, rump or T-bone?

Butchers divide the cow into different cuts – the specific division used may vary by region and country (below, for example, is an American diagram). Cuts of beef include roast beef, fillet, prime rib, shoulder and collar. The butcher takes the cuts and divides them up further into smaller pieces, including steaks. Steaks may, therefore, come from different parts of a cow.

The cut from the hip is called rump. The fillet yields steaks with opulent names such as chateaubriand, tenderloin, filet mignon and tournedos. The roast beef cut, taken from the back, is particularly versatile. Steaks that are usually taken from the roast beef cut include porterhouse, T-bone, rump, entrecôte and rib-eye. Certain steaks, such as T-bone, contain bones, while others, such as rump steak, are bone-free. This depends entirely on the cut.

Entrecôtes are slices from the rib and the fore-rib. The name comes from the French words “entre” (between) and “côte” (rib). Not everyone knows that entrecôte and rib-eye are the same cut. Rib-eye merely gets its name from the typical eye of fat in the middle of the meat.

Slices from anywhere on the loin that contains a bone are referred to as t-bone steaks. This includes parts of the fillet and the roast beef. The name refers to the characteristic shape of the bone. The various cuts of beef (US diagram)

Do not worry about storing raw meat in the fridge

Particularly when it comes to raw meat, many people worry about making a mistake when it comes to fridge storage. In the BioFresh DrySafe, however, you can store steaks at a temperature of just over 0 °C for a few days. The general rule is that the lower the temperature the greater the delay in growth of undesirable micro-organisms. If the meat has not been vacuum packed in a protected atmosphere, it should be on a plate and covered with cling film. 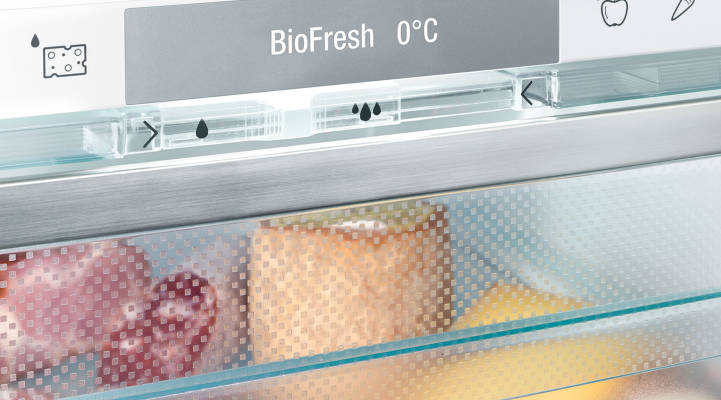 Steak is best stored in the BioFresh DrySafe

“How would you like your steak? Rare, medium or well done?”

We’re all familiar with being asked this in a restaurant, but how do you achieve the same results at home? The easiest way is to grab your roasting thermometer and have it at the ready for your next steak evening.

If your guest asks for a rare steak, the thermometer should not exceed a core temperature of 45 to 50 °C. The inside of the meat will then be “bloody”, transitioning to a pink hue further out and a crispy, brown crust.

The stage above rare is medium rare, also referred to as pink or à point. Here, the meat is consistently pink throughout the inside.

Above this, a medium steak has a core temperature of 60°C. The meat is only slightly pink on the inside and, again, offers a crispy, brown crust. The meat is springy when pressure is applied.

When a steak is well done, the meat is no longer pink, but instead is cooked all the way through. To achieve this, the core temperature must exceed 72 °C.

Steak specialities from around the world

In award-winning cuisine, in particular, one type of beef is all the rage: wagyu beef from Japan. Another speciality is Kobe beef, which comes from wagyu cattle from the Japanese region of Kob and is the most expensive beef in the world. This is because Kobe cattle generally live three times as long before slaughter as conventional cattle, graze on meadows in small herds and generally do not receive any hormones or antibiotics.

All wagyu steaks have a high degree of marbling. The fat they contain is a flavouring source that makes the meat particularly tasty and juicy.