The cheeky little super fruit is one of New Zealand’s top exports. Sometimes- and originally- known as the ‘Chinese gooseberry’, it has its origins in China, where it is known as mihoutao – the macaque fruit, because the monkeys are apparently huge fans. The animal angle also influenced its now popular name, when growers in New Zealand looked for a name that more strongly tied the fruit to the island: Kiwis are adorable, small, brown birds – long beaked and flightless – native to New Zealand. They have developed national symbol status. The people of New Zealand refer to themselves as kiwis- and usually don’t shorten kiwifruit to avoid unnecessary confusion. 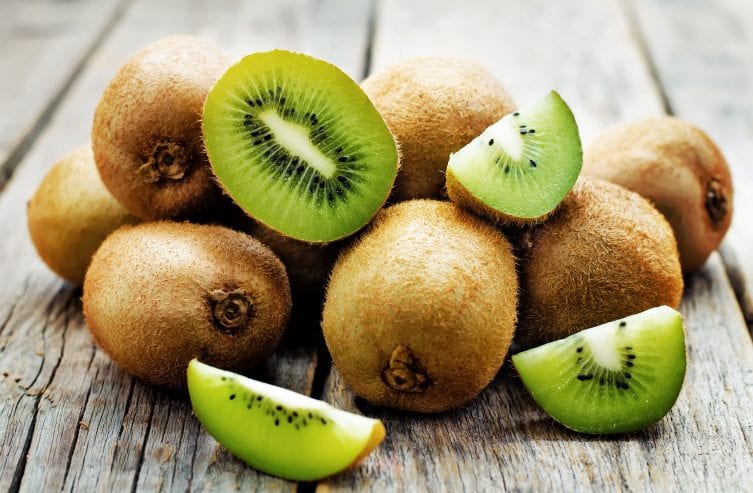 Heavily associated with New Zealand these days, the kiwifruit actually originated in China. A teacher brought the fruit to New Zealand at the beginning of the 20th century and it quickly became popular. China and Italy are the top kiwi producing countries in the world, New Zealand ranks third.

Soldiers were, as is often the case, the reason the American palate broadened its horizon: Stationed in New Zealand during World War II, US servicemen became huge fans of the fruits by then in plentiful supply. They made their way to California after the war, but it wasn’t until the 1960, when growers in New Zealand came up with the marketable name ‘kiwifruit’ that they became widely known as such. A Californian importer liked the named and used it over here as well.

The kiwi is a climacteric fruit. It continues to ripen after harvest. Whilst harvesting in the Northern Hemisphere takes place from late October to early November, the fruits will not be ripe and ready to eat until about 3 or 4 weeks later. It’s available in supermarkets all year round.

The kiwifruit is very versatile. It tastes great in fruit salads, in shakes and smoothies, as a fruit purée, and in cakes. If you want to eat fresh kiwifruit, pure and simple, just cut one in half through the middle and spoon out the two halves. Alternatively, you can peel them and cut them into slices.

Kiwis combine brilliantly with other fruits in a fruit salad or in a healthy smoothie.

Kiwifruits store very well in both the fridge and freezer. They can be kept for up to 40 days in a refrigerator compartment. In a BioFresh compartment even up to twice as long: 80 days, depending on ripeness level. Bruising affects storage life.

Kiwis can also be stored frozen for up to 12 months. As kiwifruit contain a lot of water, the fruit will lose its firm consistency, yet taste absolutely fine once thawed. A great idea is to freeze kiwi as purée. After defrosting, it can be used for making smoothies, cocktails, jam or dessert toppings and so on.

Kiwifruit contain lots of vitamins and have a delicious sweet-and-sour taste. They contain considerably more vitamin C than many other fruits. A large kiwi can meet your daily vitamin C requirements. In addition, kiwis also boast a high vitamin E content- twice as much as an avocado. They contain lots of minerals such as, potassium, calcium, magnesium and phosphorus. They are nutrient dense and extremely low in calories!

Thanks to their high vitamin content, kiwis are believed to help strengthen the immune system, speed up metabolism, and stimulate muscle activity.

Kiwis are believed to be good for you if you have diabetes.. An Italian study has demonstrated that diabetics who regularly take on board high doses of vitamin C show lower cholesterol values and have lowered insulin levels. Please check with your physician before incorporating kiwis into your diet.