It’s National Donut Day, and you don’t need a German refrigerator maker to explain to you what a donut is. Over in Germany, American donuts are popular. A more traditional variety doesn’t have the iconic hole usually associated with the delicious pastry. It comes with a surprise though! Say hello to the Berliner. 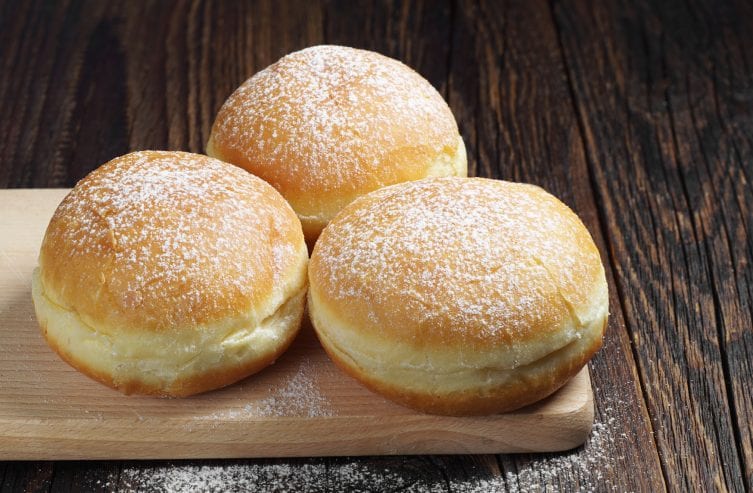 The Berliner is Germany’s variant of the donut. Don’t be fooled by its boring exterior of fried yeast dough and powdered sugar or icing. Inside a surprise awaits! The Berliner is filled with jam, marmalade, custard or chocolate. An adults only version uses advocaat, a Dutch custard-like alcoholic beverage.

How exactly the Berliner came about is not 100% clear, but legend has it that in 1756 a baker invented the fried pastry in Berlin out of gratitude. Despite being deemed unfit, he was allowed to sign up to Frederick the Great’s military service as a mobile baker. He shaped little dough balls that were to resemble cannon balls. As he didn’t have an oven to bake them, he fried them. His original recipe probably didn’t include the now customary fillings.

He called his creation Pfannkuchen. They became known as Berliner Pfannkuchen when they spread across Germany and parts of Europe in the 19th century. Over time, this was shortened to Berliner. Germany wouldn’t be Germany without being delightfully confusing though: People will look at you weird if you don’t order them as Krapfen in Southern Germany. If you want to get one at Frankfurt Airport, you have to ask for a Kräppel. Berliners are ubiquitous in Germany and available year round, but in some regions popularity skyrockets during Mardi Gras.

Around the world local names for the pastry usually include some reference to the German capital’s name. That they are from Germany is undisputed: In Turkey, they are called Alman Pastası (German Pie). In North America “jelly donut” is the most common name, but in Ontario (Canada) as well as parts of the Midwest and the West of the US they may be referred to as “Bismarks” or “Bismarcks”. This is a direct reference to 19th century German chancellor Otto von Bismarck.

A persistent linguistic urban legend is that JFK, by adding the word “ein”, accidentally said “I am a jelly donut” instead of “I am from Berlin”, in front of thousands of amused Berliners. The ein doesn’t change the meaning this dramatically and his usage of the indefinite article is grammatically correct. As mentioned above, people in Berlin call this pastry Pfannkuchen (which are pancakes like you know them elsewhere in Germany). That there was any misunderstanding about what he intended to say is highly unlikely.

We need your consent

This YouTube video is provided by Google*. If you load the video, your data - including your IP address - is transmitted to Google and may be stored and processed by Google inter alia in the USA. We have no influence over further data processing by Google. By clicking on "Accept", you consent to the transmission of data to Google for this video in accordance with Art. 6 (1) (a) GDPR and at the same time expressly consent to the transfer of data to the USA in accordance with Art. 49 (1) (a) GDPR. If you no longer wish to consent to each YouTube video individually in the future and wish to be able to load the videos without this blocker, you can also select "Always accept YouTube" and thereby consent to the associated data transmissions and transfers to Google and to the USA for all other YouTube videos which you open on our website in the future. Please note that, in the opinion of the European Court of Justice, there does not currently exist an adequate level of data protection in line with EU standards in the USA, and at present we cannot provide suitable safeguards to protect your data and offset this shortcoming. Possible risks to you of data transfer to the USA are that access by state authorities cannot be excluded and that your data could be processed for reasons of national security, criminal prosecution or for other purposes in the public interest of the USA, possibly without you being informed separately and without enforceable rights and effective means of redress being available to you. You can withdraw consent that you have given at any time with future effect via the settings. For further information, please see our Data Protection Declaration and Google's Privacy Policy. *Google Ireland Limited, Gordon House, Barrow Street, Dublin 4, Irland; Mutterunternehmen: Google LLC, 1600 Amphitheatre Parkway, Mountain View, CA 94043, USA