A Quick Guide to Christmas in Germany

Christmas in Germany is a magical time of the year. People get together for a mug of mulled wine at their local Christmas market. Families make sheer endless supplies of cookies. Of course, there are gifts. German children have to bring a stronger suspension of disbelief, because who will bring gifts in one house will not necessarily do so in the next. And what does Cinderella have to do with a traditional German Christmas?

Find out more about Christmas in our home country! 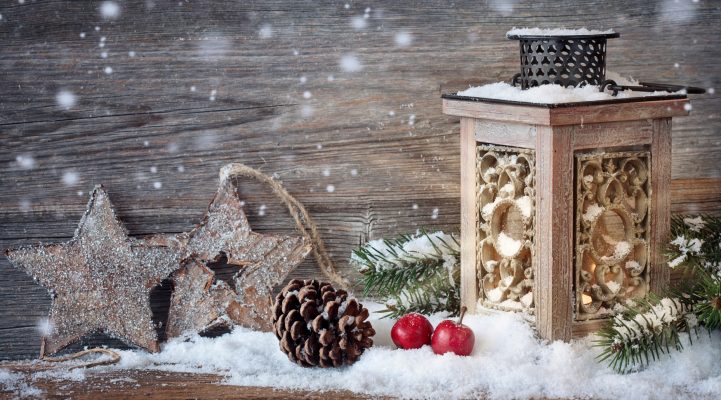 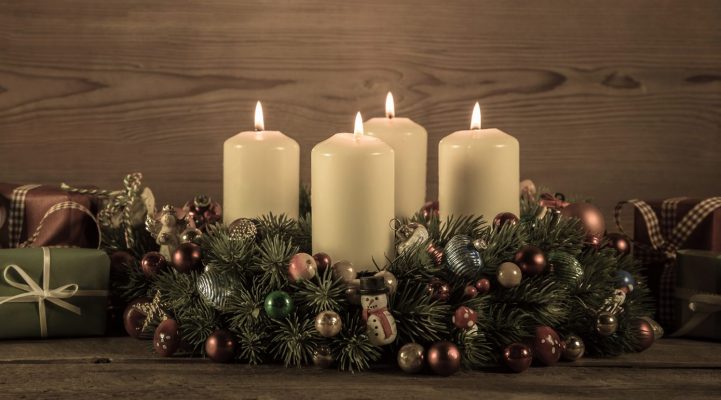 ‘Tis the season to go through many, many candles. Some Germans opt for electric candles because of the very real and present danger of burning down the house

It all kicks off on the 4th Sunday before Christmas eve. This is when German families light the first candle on their “Adventskranz”, a tastefully decorated wreath bearing four candles. On the following Sunday, the first candle and a 2nd one are lit and so on, until all four are burning on the last Sunday before Christmas eve. Theories for WHY Germans do this are plentiful, but the most consistent is that the ever stronger light from the wreath represents the anticipation for the birth of Christ, the “light of the world”.  This is also the time when Germans start decorating their homes with differing degrees of enthusiasm. Anything goes from a simple Christmas tree with or without a nativity scene up to lavish Christmas lights and decorations that will cause a reaction from the neighborhood. 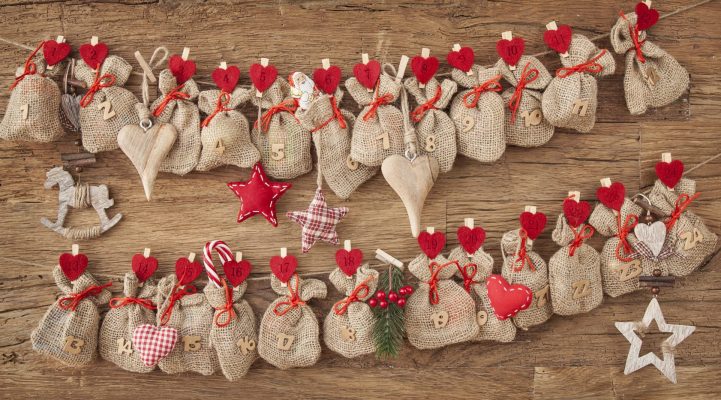 Usually, the numbers are out of order to heighten the experience that is the joy of opening a new surprise as soon as one gets out of bed. This is too easy.

The most popular advent calendars come in the form of a decorated cardboard box from one of the many German chocolate brands with little “doors” marked from 1 – 24. They are filled with small pieces of chocolate (usually with a slightly bigger piece on the 6th and a significantly bigger piece on the 24th). Many families also make their own calendars often, but not always, in the form of small decorated bags tied together by a string. In those, the little surprises may be a little more varied or adapted to personal preferences. Or simply healthier choices.

NIKOLAUS: THE VANGUARD ON THE GIFT EXCHANGE TRAIL 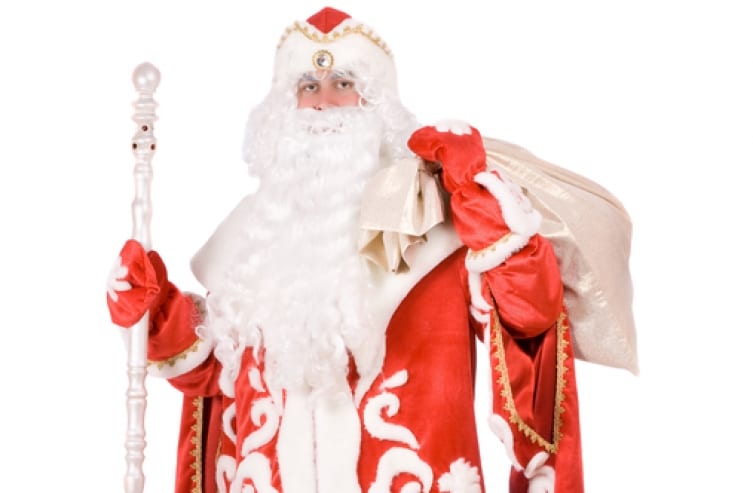 He looks familiar, doesn’t he? Nikolaus traditionally looks a bit like Santa Claus with a gym membership, because he carries all the gifts in a giant bag, no reindeer are involved.

Clean your boots and put them outside on the night of December 5 and if you’ve been good, Nikolaus and Knecht Ruprecht (Rupert the Servant) will come by and drop off all sorts of candy, cookies and – often – a smaller gift for you to enjoy on December 6. Nikolaus and Ruprecht carry all of these little gifts in giant bags. It’s a busy night for the two of them. Variations of this tradition include shoes, socks or a plate instead of boots. Ruprecht’s role can also be very different based on where in Germany you are. Nowadays, he is usually depicted as literally being Nikolaus’s helper, handing out the gifts alongside his more famous boss. It used to fall upon him to hand out the birch rod for those children who had been naughty the past year. In some families. Nikolaus also  actually  visits, usually portrayed by a neighbor, a family member or a paid actor, and delivers a sermon, followed by handing out gifts.

“You shouldn’t have!” Many Wichteln presents end up as props for another popular German pastime: recycling.

A tradition between classmates, coworkers, and members of a club or team, “wichteln” is Germany’s version of ‘Secret Santa’. A secret draw determines who you’ll buy a gift for. There is usually a set amount for the value of the gift and sometimes there’ll a general theme. Gaining in popularity is “Schrottwichteln”, or “Secret Santa’s Junkyard”. You bring a wrapped item you don’t like, that may be a little weird, just plain ugly or otherwise of questionable value and someone will randomly be gifted this curiosity. Yay for the receiver, who can only hope that organizers play a variation resulting in near perpetual exchange of these received gifts until something remotely useful is acquired!

One of the traditional German Christmas foods that has gained international recognition is Christmas Stollen, a dense fruitcake that splits the country in two: Those who love it, and those who would rather eat the cardboard from their Advent calendar. Be polite and have a small piece of Stollen when offered, then concentrate on the sheer endless variety of delicious cookies!! From Vanillekipferln, a small crescent shaped delight. to Zimtsterne (“Cinnamon Stars”) to the ubiquitous gingerbread there is something for everyone to enjoy. Family recipes for “Weihnachtsgebaeck” are safeguarded secrets and passed down from one generation to the next, never to be shared with someone outside the circle! 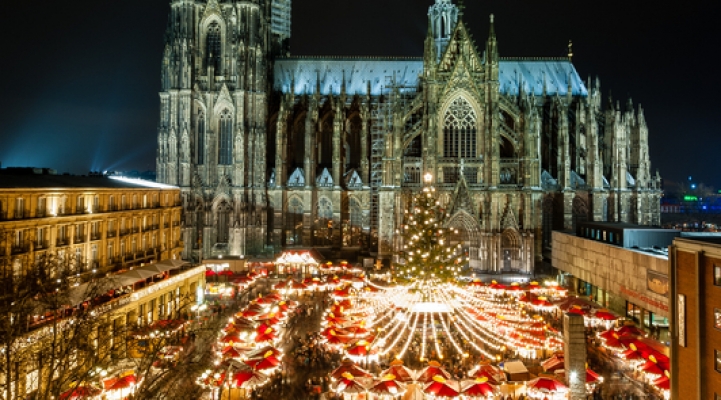 Often copied, never equaled. There is just something about a traditional German Christmas market that simply can’t be replicated. The wooden stalls! The outlandish nativity scene! The mulled wine! The garrapinyades (roasted almonds)! So many knickknacks made from felt! A German Christmas market is a tourist destination not to be missed, but beware: The Christmas moniker is misleading. It’s all over on December 23! Actual Christmas is a time for being with family and friends in Germany – there is  v e r y  little public activity between December 24 and December 26. Stores and most public places are closed from early afternoon on the 24th and reopen on December 27. From the first Advent Sunday up until December 23, however, there are plenty of markets all over Germany to choose from and some cities will even have more than just one. Nuremberg, Munich, Dreden and Berlin are some of the better known Christmas markets globally, but it are the Christmas markets of Cologne that boast the highest number of visitors. The traditional Christmas market is right at the famous Cathedral, while the “Christmas Avenue” market caters to the LGBT community since 2012. 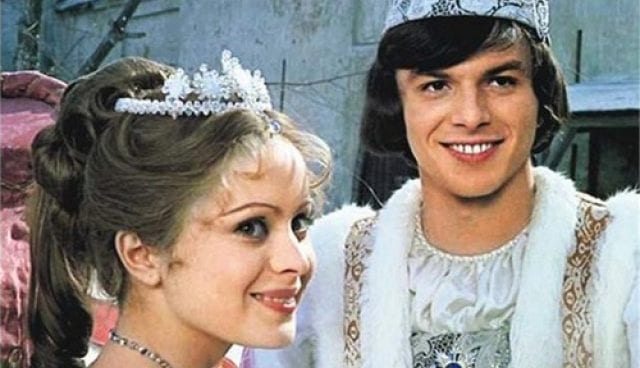 Cinderella and Prince Charming are in good spirits: They may have just missed THREE WISHES FOR CINDERELLA, but it’s on again in about 20 seconds.

For many families Christmas isn’t complete without watching this 1973 Czech adaptation of the story of Cinderella at least once. The movie’s charming twist? Cinderella isn’t passively accepting of her fate, waiting for Prince Charming to arrive. She is actively working to better her situation against, finding little ways of resistance against her godawful stepmother and stepsisters. Though, yes, at the end she’s not entirely opposed to the idea of a prince charming in her life. It’s a wonderfully fluffy movie that the entire family enjoys together.

DREI HASELNUESSE FUER ASCHENBROEDEL, as it is known in Germany, is on TV at least twelve times between December 23 and 26. Even though it doesn’t have a Christmas theme in the slightest, it is as much part of German Christmas tradition as mulled wine or cookies.

THE CHRISTKIND VS. THE WEIHNACHTSMANN

We need your consent

This YouTube video is provided by Google*. If you load the video, your data - including your IP address - is transmitted to Google and may be stored and processed by Google inter alia in the USA. We have no influence over further data processing by Google. By clicking on "Accept", you consent to the transmission of data to Google for this video in accordance with Art. 6 (1) (a) GDPR and at the same time expressly consent to the transfer of data to the USA in accordance with Art. 49 (1) (a) GDPR. If you no longer wish to consent to each YouTube video individually in the future and wish to be able to load the videos without this blocker, you can also select "Always accept YouTube" and thereby consent to the associated data transmissions and transfers to Google and to the USA for all other YouTube videos which you open on our website in the future. Please note that, in the opinion of the European Court of Justice, there does not currently exist an adequate level of data protection in line with EU standards in the USA, and at present we cannot provide suitable safeguards to protect your data and offset this shortcoming. Possible risks to you of data transfer to the USA are that access by state authorities cannot be excluded and that your data could be processed for reasons of national security, criminal prosecution or for other purposes in the public interest of the USA, possibly without you being informed separately and without enforceable rights and effective means of redress being available to you. You can withdraw consent that you have given at any time with future effect via the settings. For further information, please see our Data Protection Declaration and Google's Privacy Policy. *Google Ireland Limited, Gordon House, Barrow Street, Dublin 4, Irland; Mutterunternehmen: Google LLC, 1600 Amphitheatre Parkway, Mountain View, CA 94043, USA

Like in many central and eastern European countries, Germany’s gift exchange happens on Christmas Eve, shortly after coming back – if your family is so inclined – from Church, but generally before Christmas dinner. Children are sent to their rooms. While they are waiting, parents put the Christmas gifts for the family under the Christmas tree either the Christkind (literally “Baby Jesus”) or the Weihnachtsmann (Santa Claus) will visit the family home and drop off the presents. Gifts are ready for collection when a little bell tolls. The Christkind delivers presents in secret and is never seen. Parents will usually tell children that the Christkind will not come at all and there’ll be no presents if they try to spot it. Many Germans who grow up with the Christkind tradition erroneously believe Santa Claus to be an invention of the Coca Cola Company, with his red clothes and white beard being references to the iconic company logo.

Who brings the gifts depends mostly on family tradition and lines have become somewhat blurry. There used to be a relatively clear distinction in Germany. In predominantly Lutheran areas, the Christkind was responsible, while in Catholic areas the Weihnachtsmann was the more popular figure. German children usually accept this ambiguity as fact and since both bring gifts, both figures are equally cherished. In public depictions of Christmas, Santa Claus – not least because of the popularity of American movies and TV shows – is nowadays the dominating figure. 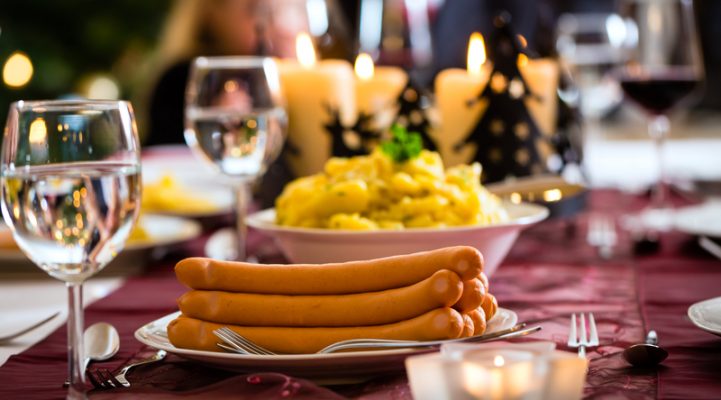 Following the unwrapping of gifts is a traditional Christmas dinner. What makes it onto your plate will vary by family and locale. Many families opt for a humble dinner consisting of “sausage with potato salad”. In some families, carp is the traditional Christmas dinner and you might grow up with a parent who thinks keeping the carp in the bathtub and getting it ready for its finale journey only close to dinner is an essential part of the proceedings. Other families will come together to enjoy a roast goose.

All that’s left from us to say is FROHE FEIERTAGE (Happy Holidays) or FROEHLICHE WEIHNACHTEN (Merry Christmas).