Whisper Quiet Operation: How Liebherr Gets Rid of Noise

With the kitchen being the focal point of a home, or in open plan living spaces, you do not want to be distracted by noise from household appliances. Reducing the noise levels of new refrigerators as much as possible is something we consider specifically whenever we design a new refrigerator. But why do refrigerators make noise anyway? And what exactly is Liebherr doing to reduce it?

Why Do Refrigerators Make Noise In The First Place?

It’s completely normal that a refrigerator will make some noise. The reason is much more complex than it used to be though. In the past, refrigerators has a compressor and a thermostat. The latter would ‘tell’ the former from time to time that it had to jump into action to keeo the temperature level. A relatively simple process.

Most newer refrigerators contain a lot more technology. This makes them both more user friendly and efficient, but this technology can be the cause of extra noise. Just think of a NoFrost-module with automatic defrosting. This is not to say NoFrost models are automatically noisier, quite the opposite. The noise level of an individual model will vary depending on a number of factors.

Modern refrigerators use an environment friendly coolant. This coolant is liquid when it is cold. During the cooling cycle it undergoes temperature changes from 176°F to -49°F, during which it temporarily becomes gas. These phase changes – condensation, sublimation and so on – can cause a specific type of “hissing” or “bubbling” noise. The old coolant will produce a similar noise, but due to different pressurization, the noise will sound distinctly different.

Liebherr engineers are constantly thinking of new ways to minimize the noise level of refrigerators and making them as quiet as possible. In special anechoic chambers, a series of tests are used to determine where noise if coming from and what can be done to reduce it.

There are many ways by which Liebherr minimizes noise. Some of these are listed below.

Conventional compressors are usually operated around 3000 rpm. The rpm of speed controlled compressors is, on average, between 1000 and 1600. The lower speed causes less noise and is more energy efficient.

Just like the compressors the fans are speed controlled as well. The operate on the lowest possible speed that ensures that the temperature in the refrigerator is distributed evenly and remains constant.

To make the appliances as quiet as possible, they are not only tested in the controlled environment of an anechoic chamber. A “sound jury” also gets to have its say! This is group of Liebherr employees from across all levels of the company, not just engineers. They give feedback on how they experience noise levels in everyday situations and what improvements should be made. Getting valuable insights into a personal experience of noise delivers much better results than test results alone.

The Most Silent Refrigerators and Wine Cabinets

Liebherr’s efforts pay off for our customers, who have access to some of the most silent refrigerators on the market. Most of our refrigerators operate on a noise level similar to expected in a library. 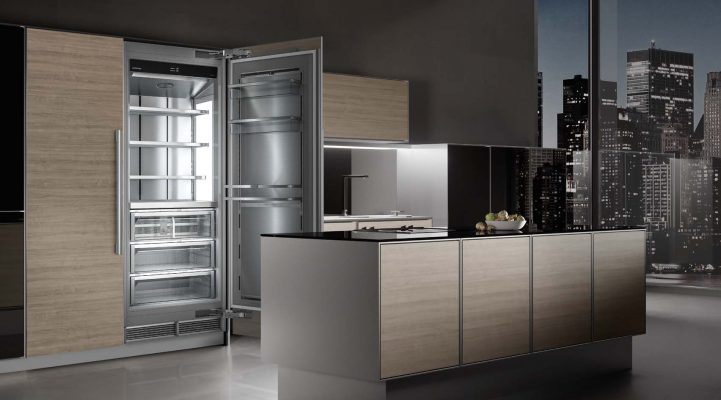 The new Monolith units all tested around 40 dB(A), the same noise level you can expect in a library – making them whisper quiet in their class.

*There is no ‘standard value’ and the actual RPM will vary from model to model and depend on environmental factors.