Butter – a fat for spreading with a long tradition. But what makes this foodstuff so distinctive? 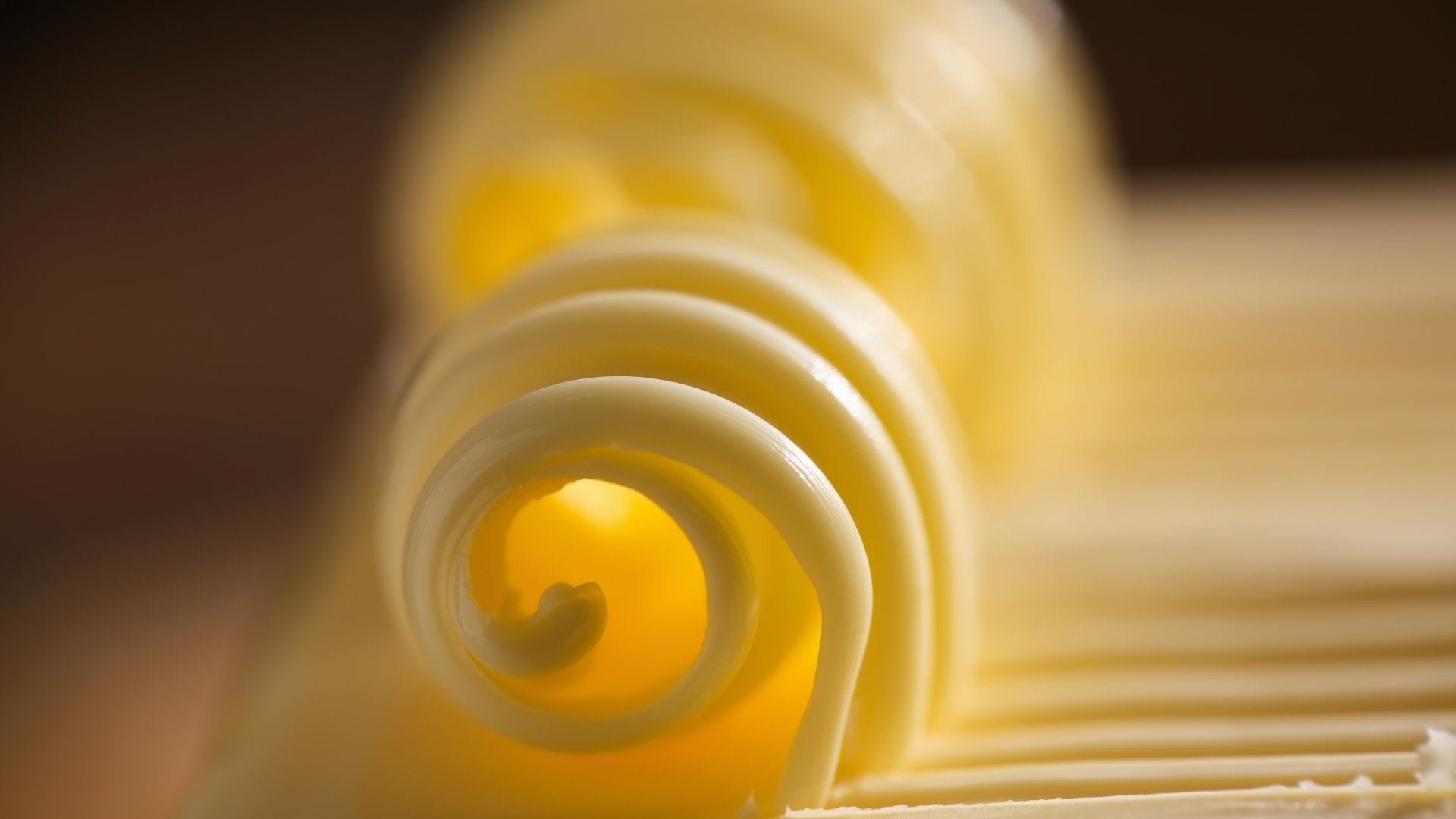 Butter is a firm favourite on the menu in many households whether as a spread for breakfast, in the massively popular butter biscuits or for lightly braising vegetables and meat. The creamy smooth spread is highly popular with its full-bodied flavour, however it is often wrongfully condemned. This is because, in moderation, butter is actually healthy! Find out here what this creamy fat is made of, the different varieties available and how easy it is to start making butter yourself.

Unfortunately, we don’t know precisely when butter was first discovered. However, it is assumed that this creamy spread was discovered when we began breeding livestock. We know for certain that in ancient times the Greeks and Romans were already using butter for medicinal purposes. Butter has been a key commercial good since the Middle Ages and was transported in churns and pots. It is made of milk, cream or whey cream and today it’s hard to imagine this creamy spread not being part of our everyday lives.

From traditional methods to the industrial revolution

In the past, producing butter meant an arduous manual process. The milk first had to stand for two days. Cream formed and was then skimmed off. After a few days of ripening, the cream was transferred into butter churns. The churning was then done by hand.

While the process remains similar, these days the use of expensive machines has made butter production a great deal easier. Cream can now be obtained much more quickly with the help of a centrifuge. Pasteurisation then occurs – in a similar way to milk – between temperatures of 85 and 110 degrees Celsius. In order to achieve the unmistakable flavour of butter, the pure cream must then ripen for up to 20 hours. Another machine, the so-called churning cylinder, is then used. This beats and works the cream until the fat separates from the buttermilk in the form of butter grains. Finally, the creamy smooth butter mixture is formed and packaged ready for sale. In total, 25 litres of fresh milk and 2.5 litres of cream are needed to make 1 kg of butter.

Not all butter is the same

However, it’s not just the quality which differs, taste also varies depending on the variety. A distinction is made between cultured butter, sweet cream butter and mildly acidified butter. Key to this is when the lactic acid bacteria are added. This is done before the churning in the case of cultured butter, and not at all in the case of sweet cream butter. Lactic acid bacteria are not added until after churning for mildly acidified butter. This means that not all butters taste the same and therefore do not go well with the same dishes. Sweet cream butter, for example, is ideal for cakes and biscuits whereas cultured butter lends itself better to savoury dishes. 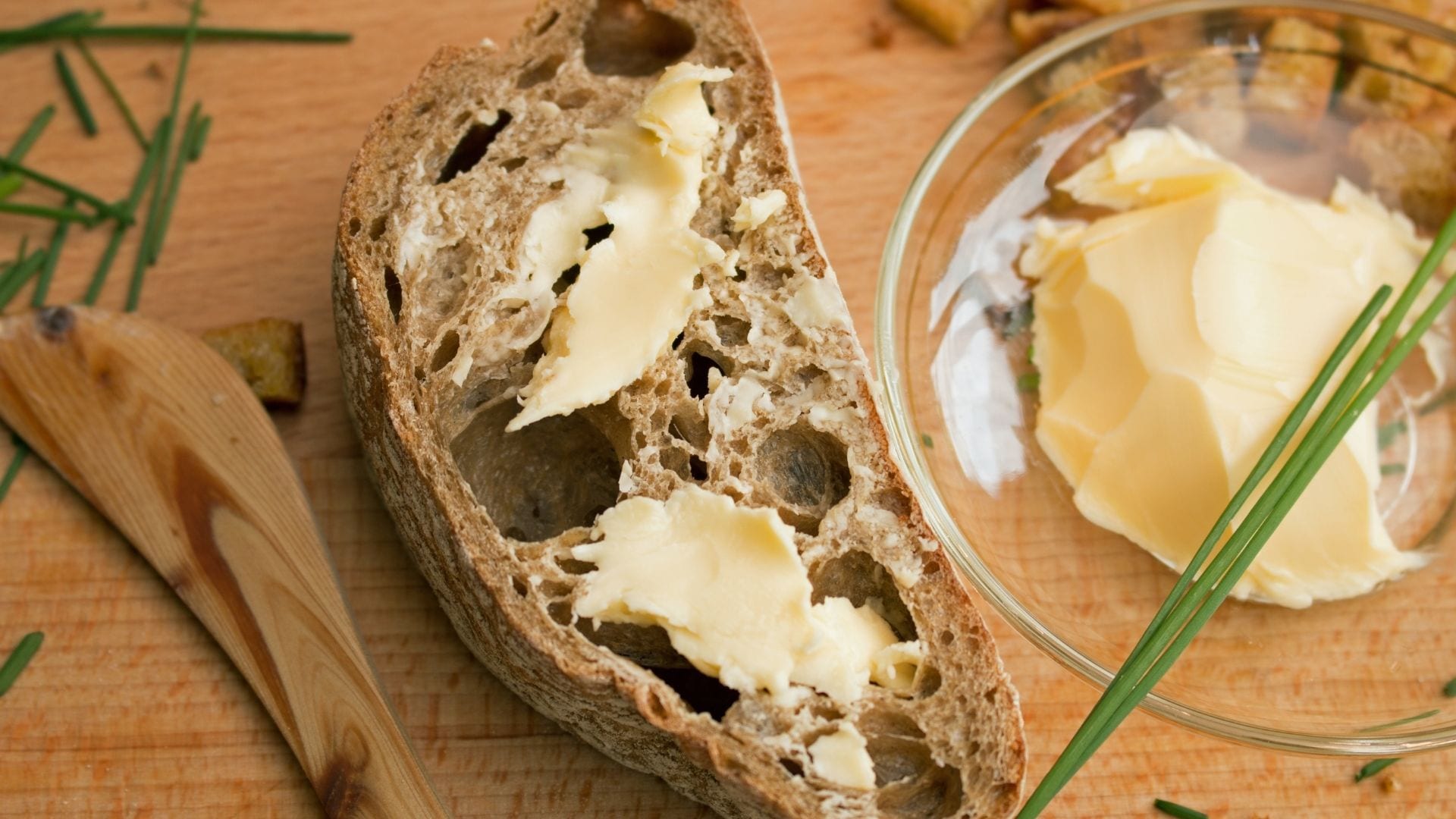 It’s all about how much

The fat content of butter must be a minimum of 80% and a maximum of 90%. The typical fat-to-water ratio however is 82:16. Varieties with reduced fat are also available on the market such as three-quarter-fat butter and half-fat butter.

In addition to saturated short-chain fatty acids, butter also consists of a large number of medium-chain fatty acids. Today we know that these have no negative influence on the unpopular LDL cholesterol. Butter also contains vitamins K2, A, D and E and minerals such as iodine, selenium and calcium. The creamy smooth fat also contains proteins. However, be aware that, when searing, these burn away rapidly and butter becomes inedible. Did you also know that when you buy organic butter, it is not just good for the animals but also for your health? Why? Cows reared organically are fed only hay or grass which supports the formation of omega-3 fatty acids. The proportion of saturated fatty acids is still high. However if you have no underlying medical conditions such as diabetes or heart problems, you can enjoy the full flavoured taste of butter without worrying. In this case, as always, it’s all about how much!

If you prefer to avoid butter for health reasons, then the plant-based alternative of margarine may sound tempting. This was originally invented in wartime as an affordable replacement for butter, however it contains far more omega-3 and omega-6 fatty acids. However, margarine involves one key disadvantage. When solidifying (tempering) margarine, so-called trans fatty acids are created which have a negative impact on our cardiovascular system. If you have heart problems, it is therefore best to check with your doctor to find out which fat is best for you. Margarine also cannot compete with the distinctive flavour of butter, however for vegans it is certainly a very good alternative.

Do you fancy making butter at home? Or maybe you just bought far too much cream? If so, then in just a few simple steps you can produce your own creamy butter. All you need is a clean screw-top jar and cream. Once you’ve put the cream in the jar and closed it tightly, it’s time to shake, shake and keep on shaking. After a while, a yellow clump is produced – this is the butter. Why is this? When shaking, the membranes of the milk fat globules are broken down and they mass together. This creates the by-product of buttermilk. If you prefer a slightly harder butter, then you give the whole thing a good knead. Your home-made butter is then ready.

Can you freeze butter?

Whether it’s home made or bought, it’s best to store butter in foil as it wraps around in contact with the butter and doesn’t let in any oxygen. Air tight butter dishes are also ideal. This means the popular fat for spreading can be stored for several months without any problems. To enjoy the smooth and creamy texture and for a full flavour, it’s best to remove the butter from your Liebherr refrigerator sometime before you want to use it. 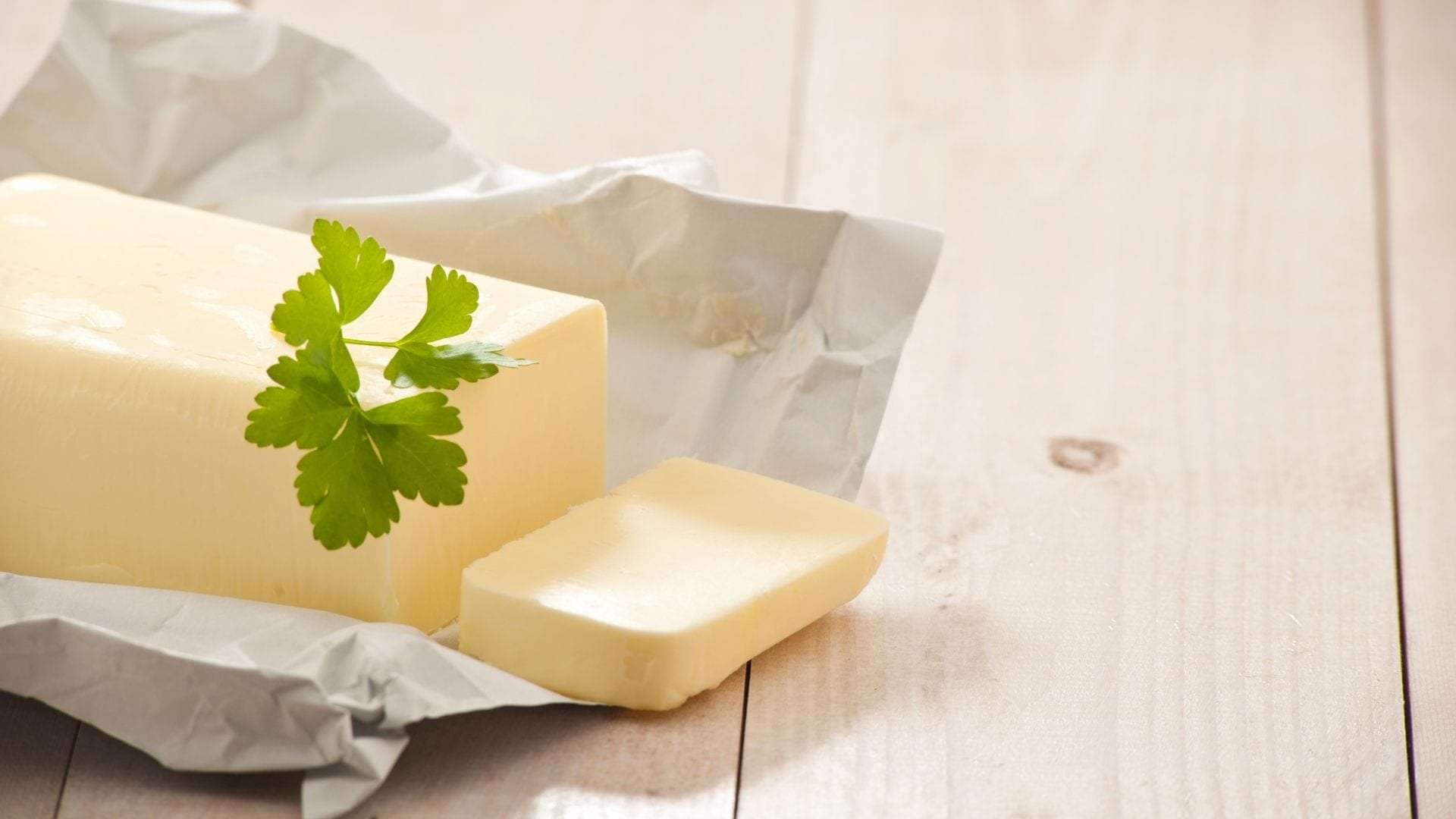 10 Facts About Pumpkins and Why we Should Eat More of Them!