Good reasons to get more buckwheat on the menu

Buckwheat is not only a great addition to wholemeal cuisine, this pseudograin is a big hit in many dishes. Is buckwheat flour on your weekly shopping list? Maybe it will be after you read our article on this exciting pseudocereal. Buckwheat unfairly occupies the lowest rung on the hierarchy of cereals in our country behind rice, wheat flour or other grain products. A quick tour of Russian cuisine yields a multitude of inspiring ideas for how the versatile buckwheat can be integrated into your every day diet.

One interested party doesn’t need to be convinced of what a fantastic plant buckwheat is: the bee. This industrious insect thinks quite highly of buckwheat indeed, with its hundreds of flowers on every plant and rich supply of nectar and pollen when the plant blooms in late summer. So buckwheat is already indirectly a boon to us and to our planet. But even beyond that, this pseudocereal is a perfect package for sneaking important nutrients onto our plates.

Pseudo-cereal you say? What does that mean exactly?

Buckwheat – just like quinoa and amaranth – is known as a “pseudocereal”. Why’s that, you ask? Because you can use them in the kitchen just like “real” grains, but botanically speaking, they are not grains. Buckwheat is a knotweed plant, related to rhubarb but not to wheat, rice and spelt etc. Those all belong to the grass family. But buckwheat is, in fact, starchy just like wheat and can therefore be used as an excellent flour. The “buck-” in buckwheat has to do with the visual similarity between its triangular seeds and beechnuts (the fruits of the common beech).

Buckwheat is indigenous to the vast steppes of Mongolia. Carried by waves of migrating peoples, the plant found its way into our fair pastures and has also been cultivated here for several centuries – if only in somewhat smaller quantities. In Austria, buckwheat is also called Heidekorn (heath grain), which probably has to do with the “heathen” nomads who brought the knotweed plant to Europe. Groats, wholemeal and semolina from buckwheat

Buckwheat grains are nuts and are not so easy to crack. In order to be able to use buckwheat in the kitchen, manufacturers remove the brown husk since it’s hard, inedible and contains a pigment that’s harmful to humans. Similar to cereals, the hulled grains are called groats. These groats can be coarsely crushed to make wholemeal. Buckwheat wholemeal is therefore nothing more than crushed, hulled buckwheat grains.

However, buckwheat can also be used to make semolina or flour. A different processing method is used for this. For flour, the hulled grains are not cut up, but rather ground. If the grains are only coarsely ground, it’s called semolina. If they’re finely ground, it’s flour. So buckwheat products are quite versatile.

And what about the nutritional value of buckwheat? The protein content and composition of buckwheat are particularly positive: Almost ten percent of the hulled buckwheat grains are valuable proteins. Its capacity to absorb liquids is also a plus, making you feel full longer. By the way, buckwheat is gluten-free. 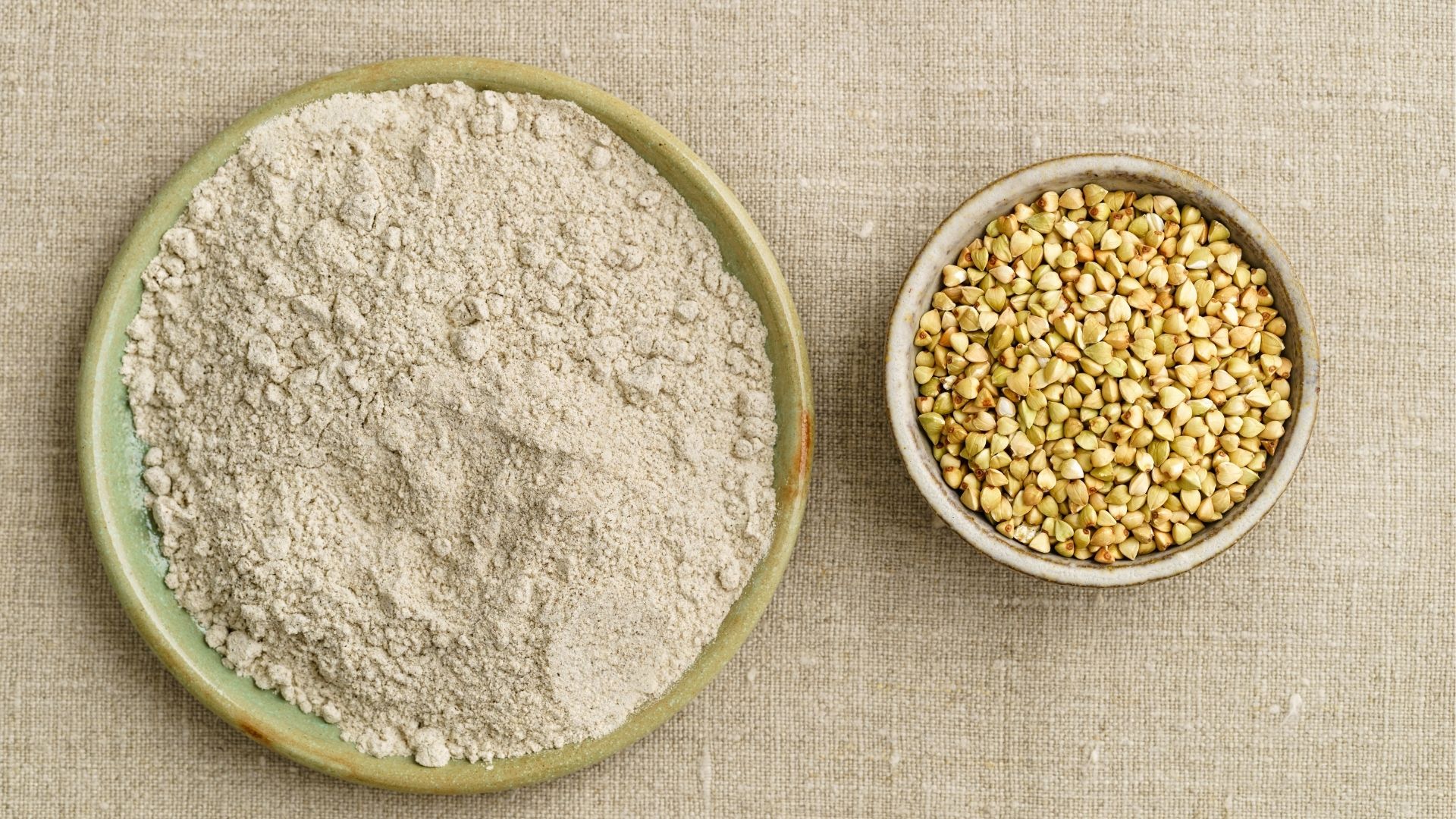 Cooking and baking with buckwheat

The fact that buckwheat does not contain gluten presents some minor challenges when you’re baking with buckwheat flour. This is because gluten holds things together, giving wheat its excellent properties. In fact the term glutinous, meaning sticky, is derived from gluten which is Latin for glue. So mixing water together with wheat or other gluten-containing flour creates the wonderfully elastic and stretchy dough that makes baking so easy. Because of the lack of gluten, breads or baked goods containing buckwheat are therefore usually mixed with other grains that provide the desired level of gelatinisation.

Whether sweet or savoury, buckwheat in all its processed forms can be used in a wide variety of dishes. In Japanese cuisine, buckwheat flour is used to make soba noodles, which are served with hearty broths. The French love their galettes: hearty crepes made with buckwheat flour that make your mouth water. The nutty flavour of the buckwheat makes them just perfect!

But it’s not only the French and their galettes who are huge fans of buckwheat. In Russia, the pseudocereal is also found in any number of dishes. Blinis are the Russian version of buckwheat pancakes. They become wonderfully airy and fluffy with the addition of a little yeast. Blinis are eaten with smoked fish and crème fraîche.

But Russian cuisine has other buckwheat classics like kasha. Kasha is made of buckwheat groats roasted in a pan, mixed with liquid (water, broth or milk) and cooked. Whether you have it sweet (with fruit or sugar – similar to rice pudding) or savoury (as a side dish with roasted onions for meat dishes) is entirely up to your personal predilections.

The savoury version of buckwheat groats or even whole, hulled grains is a wonderful alternative to classic rice, pasta or potato side dishes: Simply roast the grains in a pan and cook them like rice. Done! By the way, buckwheat can also be eaten raw, but it is recommended to soak or rinse this pseudograin in hot water beforehand. 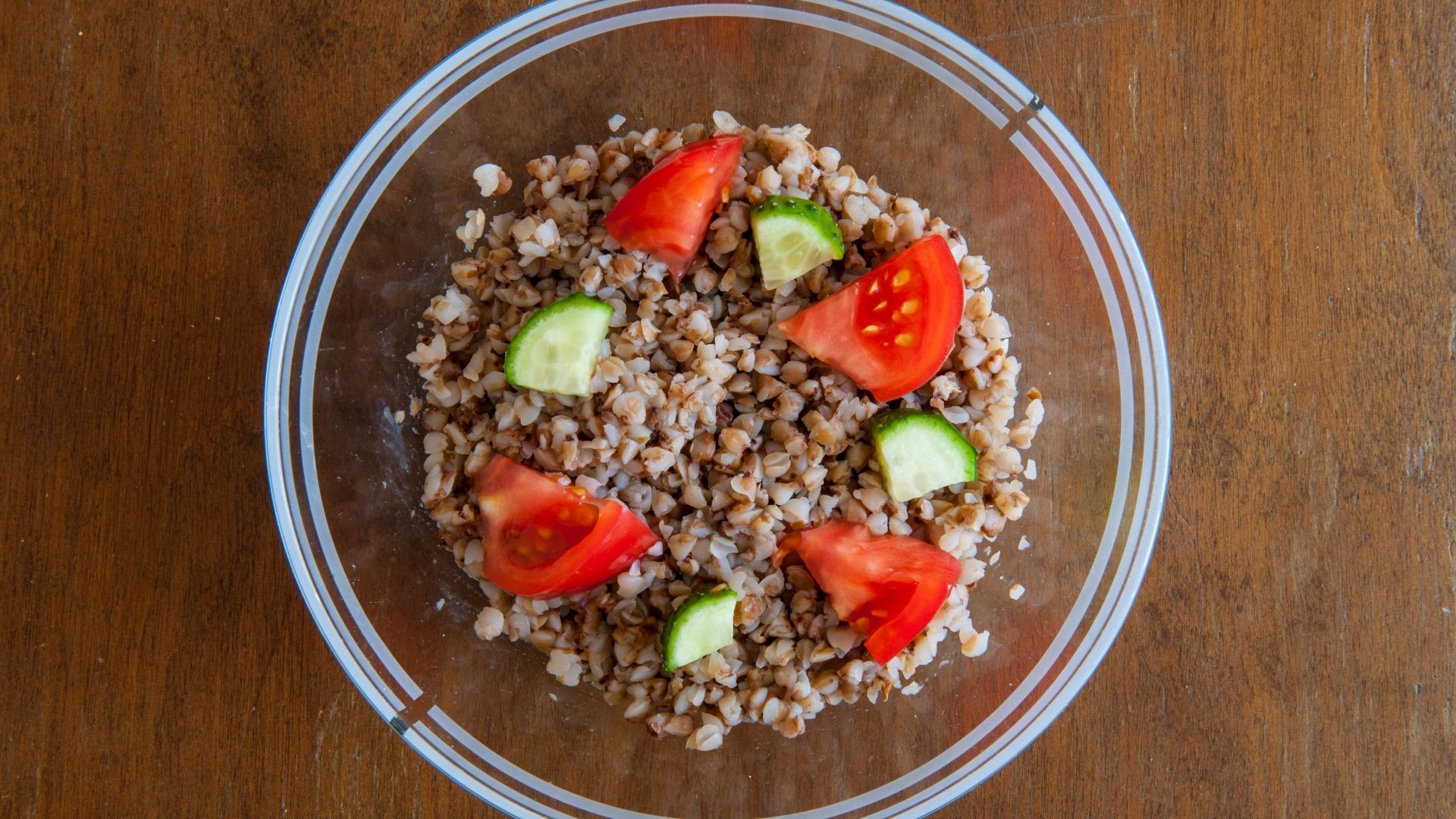 The Benefits of Oats