There is one dish even the fussiest children will not say no to: spaghetti. Whether with tomato or Bolognese sauce, it’s not just the little ones that love it; many adults also enjoy pasta several times a week. Only one percent of Germans state that they never eat pasta. And our enthusiasm for pasta is growing: while at the end of the nineties, we already consumed over five kilograms of pasta per capita and year, today it is as much as eight kilograms.

You could fill whole books with stories about pasta, because it is so varied. Today, we are mainly looking at the Italian version of pasta. But it should be mentioned that basically every country has its own special versions of pasta: in Asia, there are countless types of noodles made from rice flour or starch, and we in Germany have our Spätzle and Maultaschen.

Opinions differ as to which nation was the first to come up with the brilliant idea of conjuring up wonderful dishes from the simple ingredients of flour and water. The most widespread legend is that the sailor Marco Polo brought pasta from China to Italy in the 13th century. Whether Asian or Italian, we love all the variations of this filling food!

Ground grain, water, salt. In principle, that’s all we need for the production of our beloved pasta. Nevertheless, the variety of pasta types is almost infinite – and this is due to the different types of grain, milling degrees, additional ingredients, shapes and manufacturing processes. The majority of the products on supermarket shelves are made of pasta made from durum wheat semolina. Durum wheat is a type of wheat which is processed into semolina in a mill. Semolina is coarser than flour: the granule size is between 300 and 1,000 µm, whereas flour particles are smaller than 150 µm.

Besides durum wheat semolina, Italian type 00 wheat flour is particularly popular: its gluten content is particularly high, which ensures good properties for dough production. But wheat is not the only thing that can be used for pasta production; corn flour, spelt flour or other cereals are also an option. And don’t forget the increasingly popular pasta made from pulses, such as chickpeas or lentils. The addition of special ingredients further increases the variety: have you ever tried black pasta? Or green? Black pasta is made by colouring the dough with squid ink, while spinach is added to the dough for green pasta.

Variety of shapes as far as the eye can see 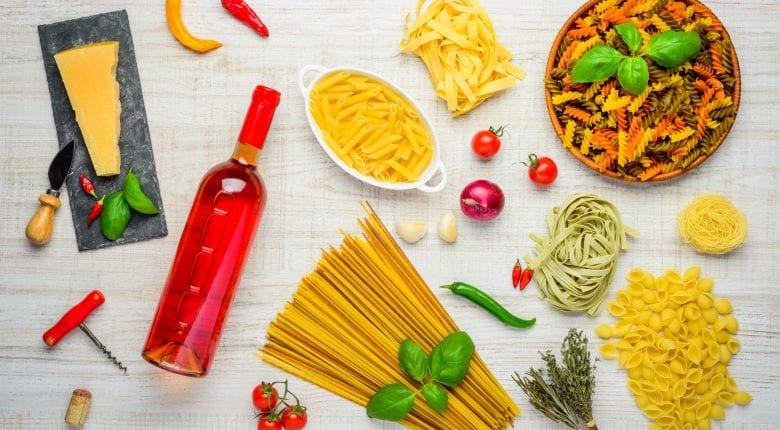 Every Italian region has some local pasta varieties that differ only in their shape. Depending on the type of pasta, different sauces also fit particularly well in combination with it. This is mainly related to the form, but sometimes it is also simply traditional and can be varied. To give a few examples: Fusilli, with their spiral shape, are great with chunky sauces (e.g. with finely diced courgettes, tomatoes and carrots), as they absorb the sauce particularly well, thanks to their shape.

Stuffed pasta – such as ravioli or tortellini – is best eaten with a simple sauce, since you don’t want to steal the show from the pasta filling. Our tip: melted butter with a little sage (if suitable for the filling), toss the stuffed pasta in it and refine with grated Parmesan cheese.

Have you ever noticed that some manufacturers advertise on their packaging with “al bronzo” or “bronze”? What is behind this? This is about forming the dough. On an industrial level, this is done by a large pasta machine that uses a so-called extrusion process – and has been doing so for about 80 years. The dough is rolled and pressed out of the machine; the shape of the noodle can be varied using different nozzles. Nowadays, the rollers are mostly made of a type of plastic – but not all of them: some rollers are made of bronze, and this is said to be an advantage by pasta connoisseurs. The structure of the pasta becomes rougher, so that it absorbs the sauce better. We think this would be interesting to try out ourselves! Speaking of trying things out: have you ever made pasta yourself? Just mix flour with eggs (one egg per 100 grams of flour as a rule of thumb) and salt and knead the dough thoroughly. Feel free to experiment with different flours and the addition of durum wheat semolina and slowly create your personal secret recipe. The dough then has to be rolled out and cut into shape; of course, this is particularly easy with a pasta machine, but this is not essential. Put the pasta into boiling salted water and it will be ready after only two to three minutes. You can unhesitatingly store your home-made pasta in the refrigerator for several days. However, it is also a good idea to prepare a larger quantity of dough and then freeze part of it – then it is guaranteed to be worth the effort.

Incidentally, dried pasta from the supermarket has a virtually endless shelf life: because it contains no freely available water, it offers microorganisms no chance of survival. Simply store your pasta dry in a closed box.

Is pasta bad for the waistline?

Pasta consists mainly of flour, so the primary source of calories are carbohydrates. The added sauce usually provides more fat content. A cream sauce completed with a good portion of Parmesan cheese is usually the real reason for the high number of calories on the plate. However, every now and then you can treat yourself to a tasty portion without remorse.

Pasta made from wholemeal flour is the variant with a nutritional advantage as not only is the mineral content higher, but the higher fibre content also impresses with its satiating qualities and positive health effects. If you then add a sauce that contains a lot of vegetables, you no longer really need to worry about your figure.

Have you ever made pasta yourself? Which type of pasta is your favourite and which sauce do you combine with it? Share your tips and tricks with us and the community!