The German Wine Route: A Trip Worth Taking
Frank Kämmer

The German Wine Route, or Deutsche Weinstrasse, is the first and probably the best known touristic wine route in the world. The 53 mile long route was established in 1935 after a particular successful harvest, which led to a dramatic price drop for German wines. The Wine Route connects picturesque vintners’ villages in the state of Rhineland-Palantine. If you want to experience the South of Germany at its most quintessential, there’s no better place to start. 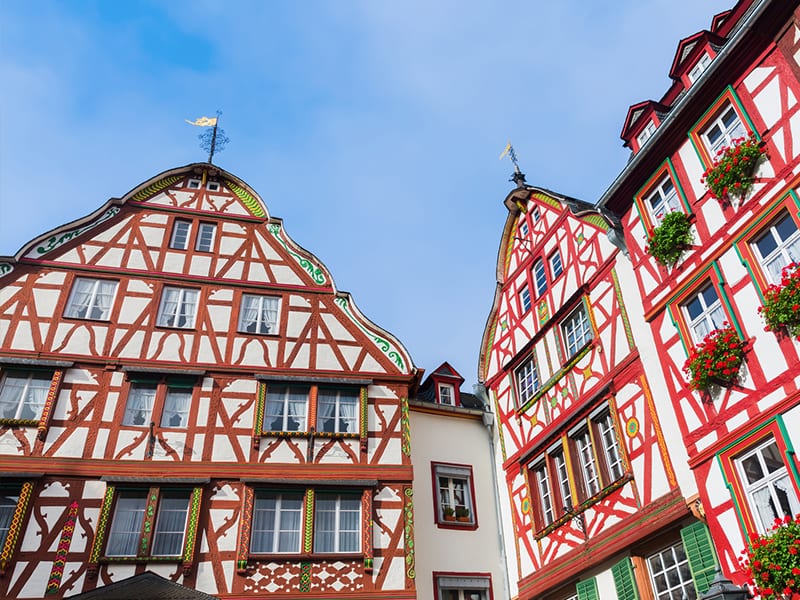 To experience and get to know wine at its origin is a highlight for many connoisseurs. Visiting the vintners, strolling through their vineyards and getting a taste of the local cuisine – all of this is part of the “on location” wine culture experience. Many wine regions have created special wine routes to encourage tourism and welcome wine enthusiasts from around the world, but none are as well known and popular as the Weinstrasse.

The Beginnings of the German Wine Route 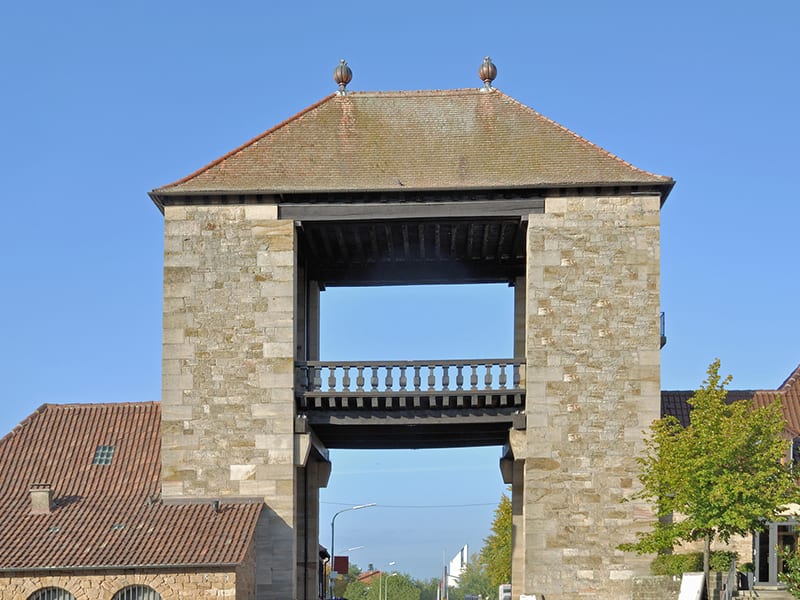 The Weinstrasse is considered the archetype of connecting wine and tourism. Officially opened on October 19, 1935, the Wine Route starts in Schweigen-Rechtenbach with the German Wine Gate right at the French border and winds itself along 53 miles of national highways connecting some of the most important wine towns of the country along the route. It ends at the House of the German Wine Route in Bockenheim an der Weinstrasse. This house didn’t open its doors until 1995 and now marks the official endpoint. Municipalities along the route were told to add “an der Weinstrasse” (by-the-Wine Route) to their names.

With its location on the western edge of the Rhine Rift valley protected by the Palatinate Forest, the region along the wine route is considered one of the most fertile in Germany. With warm air moving up the Rhine valley like in a chimney, spring starts earlier than in any other part of the country. It’s no surprise that particularly fruit heavy and succulent Riesling grapes grow here – the area is considered the largest cultivation area of the grape in the world! 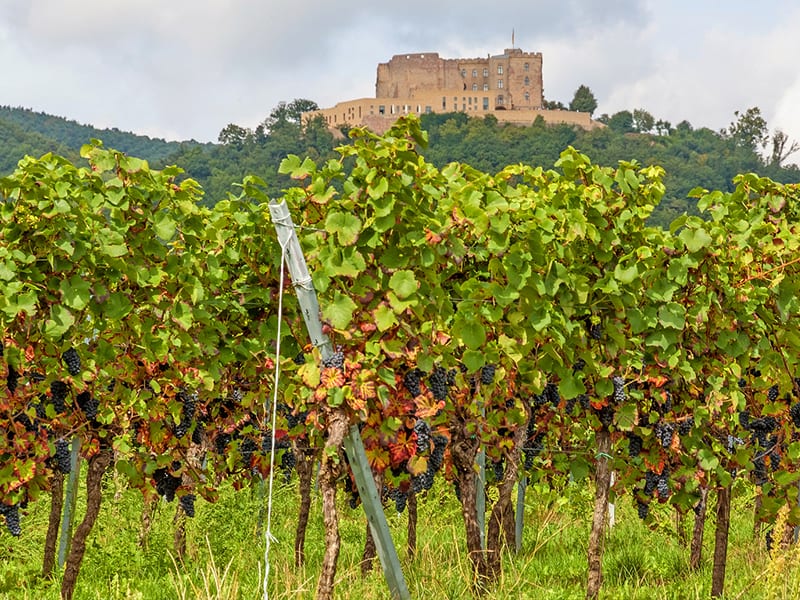 Grapes are not the only fruit that benefit from the ideal climate conditions of the area. Citrus fruits and even kiwis can be successfully grown in one of the warmest regions of the country.

The mild climate, the beautiful landscape and the luft for life and pleasure of the local people have earned the region the nickname “Germany’s Tuscany”.

Countless vineyards are inviting you to their tasting rooms, while wine bars and inns along the Wine Route offer many opportunities for stops along the way.

Sights To Behold Along The Way

A visit to Hambach Castle, a symbol of the German democracy movement, the city of Landau and the Museum for Wine Culture in the city hall of Deidesheim make for good excursions along the route. Hiking enthusiasts will appreciate the Palatine Wine Trail, which goes across the region from Schweigen in the south to Bockenheim in the north. 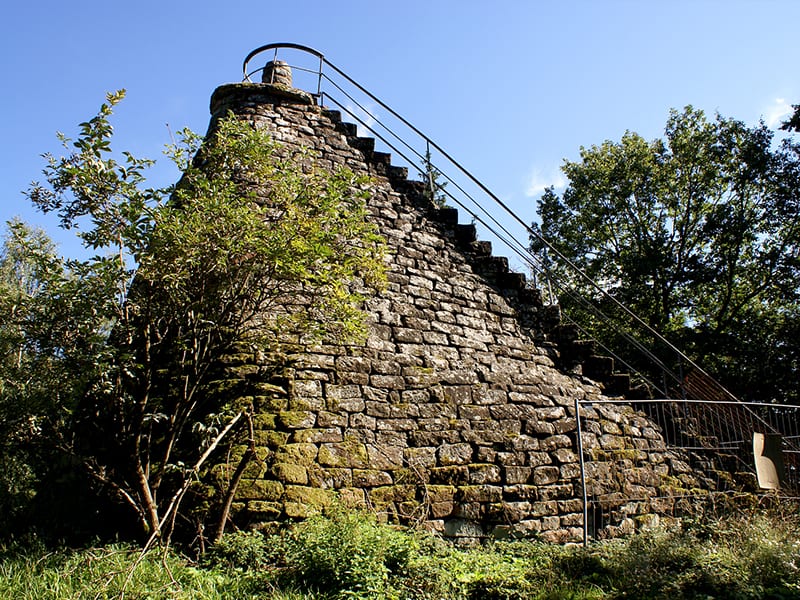 The 2nd and 3rd weekend of September are reserved for the annual Wurstmarkt (lit. Sausage market) in Bad Dürkheim. With over 600,000 visitors every year, it’s the worlds biggest wine festival. 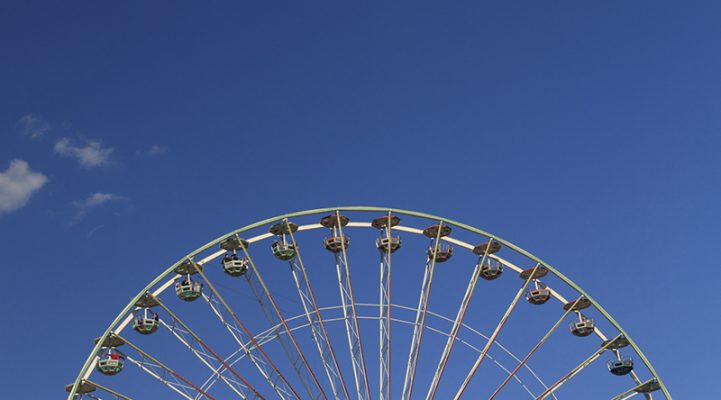 Start your trip to the German wine route by flying to Frankfurt Airport and rent a car or take part in an organized tour from there! Find out more here.

And if you come back with a few bottle of wines as souvenirs from the trip? There is no better place for storage than a wine cabinet from LIEBHERR! Discover our range here.

Sweet and Cheap? The Lost History of Liebfraumilch