Chilli – the spicy pod that brings the heat

Breaking out into a sweat and feeling happy at the same time. In our article, we’ll reveal why meals seasoned with chillies trigger both of these reactions.

It’s small, but packs a punch: the chilli pepper. It’s usually red, which is already a signal to us to be careful. This is because it’s not uncommon for chillies to be extremely hot. In our article, we’ll reveal what you might not yet know about this spicy pepper.

Chillies come in numerous shapes and colours and that’s why their degree of hotness also varies. They belong to the capsicum genus, which is the Latin name for peppers. Many different varieties belong to this plant genus such as the species capsicum annuum. In turn, bell peppers as well as various types of chillies belong to this species. Did you know that the mild bell pepper is really closely related to hot chillies?

Capsaicin, a chemical compound found in differing concentrations in all members of the capsicum genus, is of particular interest. Capsaicin is what makes chillies hot. The hotter the chilli, the more capsaicin it contains. The chemical substance is found in the skin and the fruit flesh, but particularly in the interior ribs and seeds. So, if you remove the seeds and ribs, the hotness of the chilli is somewhat reduced.

Those who eat spicy food regularly know that the body may sometimes react strongly to the hotness. The capsaicin actually triggers several responses in us. It stimulates stomach activity, expands the blood vessels and boosts the metabolism. And we often break out into a sweat – a physical response to the heat that the capsaicin triggers. If some of the substance reaches our mucous membranes then the burning is preprogrammed. Therefore, avoid rubbing your eyes after cutting chillies! Did you that pepper spray also uses the mucous membrane irritant effect of capsaicin. The substance is extracted from plants from the capsicum genus.

So is capsaicin healthy or not? As is so often the case, it’s the dose which determines whether it is toxic. In moderate amounts, chillies have a positive effect. They stimulate the metabolism and the distribution of endorphins, creating a feeling of happiness. However, excessive consumption of the substance can cause damage to the mucous membranes in the gastro-intestinal tract. Even the liver and kidneys can be damaged. The reason why we develop a tolerance to spicy food is that the body distributes less neurotransmitters in reaction to the capsaicin over time. The result is that we feel less pain the more often we eat spicy food. 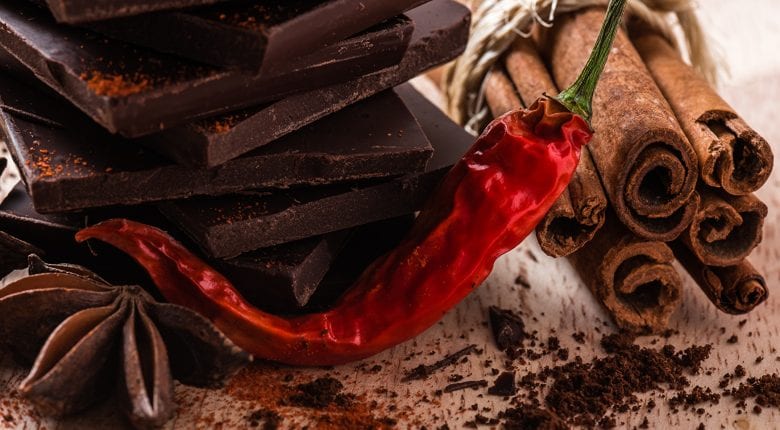 Measuring hotness with the Scoville scale

It’s too sweeping a statement to say whether chilli powder is hotter than whole chillies or not. Instead, this depends more on the variety and its respective capsaicin content. A dried chilli is however hotter than a fresh chilli of the exact same variety. The reason for this is that the concentration of the compound which makes it hot increases through the moisture loss of drying.

You have most probably heard of the Scoville scale before. The scale is named after a pharmacologist called Scoville who invented a test for measuring chilli hotness at the beginning of the 20th century. These days, the degree of hotness is no longer measured with senses and sensations, but rather with the assistance of analytical procedures. At the lower end of the scale, at 0 Scoville, you’ll find the bell pepper and therefore, no spiciness can be detected at all. The scale ascends up to several million Scoville. Famous chilli varieties, such as the jalapeño, are situated at approximately 5,000 Scoville and the habanero is at 200,000 Scoville.

What can you do to counter the hotness?

If your food is hotter than expected, then unfortunately one method does not help: drinking water. The desired effect is to flush away the hotness, yet the capsaicin which is responsible for this is not water soluble. So something fatty must be used to soak up the substance and reduce the hotness. The advice often given of drinking a glass of milk after a spicy meal is therefore recommended more than simple water or sugary drinks. The higher the fat content the better.

Cayenne, jalapeño and the like – the diversity of chilli varieties

There are more than 300 different types of chillies in the world. These include the jalapeño. The jalapeño comes in green and red varieties, these mainly come as either fresh or smoked. Smoked jalapeños are called chipotle. Another variety is the tabasco chilli, which is used to make the famous sauce of the same name. Cayenne pepper is a name familiar to everyone – but what is less well known is that this is actually a chilli and not pepper. Cayenne chillies are the very spicy fruit of the cayenne plant. These are dried and ground into the famous, or infamous, cayenne pepper.

In many parts of the world, chillies are still a more affordable alternative the pepper for spicing up dishes. Whether as flakes, powder or in sweetened form, chillies can be found on tables everywhere for adding spice to taste. Chilli threads are a real eye-catcher: these are delicate and extremely thin-cut chilli pods which have been dried. And on the subject of chilli pods: Although we usually talk about chillies as being pods, they are technically berries – as botanically speaking they are the berries of chilli plants. Chilli fans can make their own

Harissa is a well known chilli paste. It is made according to a North African recipe and can also be easily made at home. Just take two handfuls of dried chillies, coarsely cut them and soak them for about an hour in hot water. Grind the chilli pieces with two cloves of garlic, some salt and a pinch of cumin and caraway. Add some olive oil to the mixture until it reaches the desired consistency. The harissa paste can then be stored in a glass, covered with oil, for a few weeks. Harissa is perfect for flavouring many different dishes – try it out for yourself!

By the way, it’s easy to grow chilli plants in your own garden. In general, chillies can be grown all over the world, although they do prefer a tropical climate. India is the most important producer – and consumer – of chillies. Last but not least, we know chillies from Mexican cuisine, such as chilli con carne. The chilli is also thought to have originated from Mexico and was distributed throughout the world after the Europeans reached the Americas. While we mostly use chillies to add hotness to dishes, in Mexico and other chilli-growing countries often fresh, large and fleshy chillies are stuffed with other food.