The Bodensee region is where the borders of Germany, Austria and Switzerland meet to hug and envelop Lake Constance (Bodensee in German). A stunningly beautiful destination for tourists seeking to pursue leisure activities and to relax, this varied and breathtaking landscape offers a great deal to capture the imagination of wine aficionados. 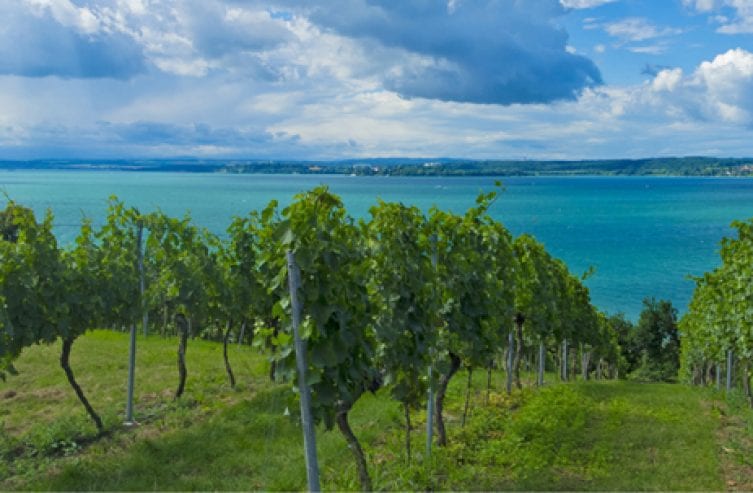 The sloping vineyards that adorn the shore of Lake Constance lie in a nurturing landscape that exudes an almost Mediterranean charm. Given the sunny reputation of this region, it often surprises people to learn that this verdant idyll is not actually the warmest of Germany’s wine-growing regions. The grapes here ripen under rather moderate temperature conditions because they grow in the most elevated vineyards in the country! The surface of the lake lies at 1312 ft. above sea level, and the wine slopes themselves often stretch up to around 1575 ft. The steep slopes of the Hohentwiel, an extinct volcano close to the western end of Lake Constance, are home to Germany’s highest vineyard, at 1844 ft.

It’s not only the cool altitude and the many hours sunshine that influence the vineyards in this region. The climate afforded by the massive surface area of the lake is also significant as it has a highly stabilizing effect on the region’s overall temperature profile, reflecting generous amounts of sunlight back onto the vineyards to facilitate slow but steady ripening of the grapes. These unique climate conditions explain why lake wines (Seewein) tend to be known for their expressive fruitiness, freshness and alluring vivacity, and why they are very much sought-after. Furthermore, in addition to the micro-climate that’s created by the lake itself, the rich and diverse sandy loam lakeside soils – mixed in part with limestone, molasse sediments and moraine deposits – also play an important role in Lake Constance terroir and cultivation. The majority of the vineyards on German-bordered Lake Constance belong to the Baden wine growing area. This region encompasses the area between Immenstaad and medieval Meersburg, close to Konstanz, Überlingen and the Upper Rhine. Here, on about 1371 acres (and alongside Pinot varieties), the Müller-Thurgau grape famously thrives to yield some of the finest examples of its type in Germany, and to produce distinctively floral wines known for their crispness and vitality.

In addition to the Baden wine region, there are also vineyards located around Kressbronn, which belong to the Württemberg growing region. The vineyards on the Bavarian lake shore at Lindau count among these. Perhaps surprisingly, there is significantly less wine cultivation along the Austrian part of the lake, with only about 59 acres dedicated to growing grapes in the state of Vorarlberg. Nevertheless, these vineyards yield some very tasty and noteworthy rarities.

The vineyards of the Swiss-bordered lakeside slopes at St. Gallen (Rheintal) benefit from exceptional growing conditions and yield some highly-flavoursome regional specialities. However, considerably more significant is the wine growing region on the southern Swiss shores in the Canton of Thurgau (where Hermann Müller, originator of the Müller-Thurgau grape variety, came from). Here, on around 642 acres, Pinot Noir, Garanoir and Regent varieties are cultivated for red wine, and Müller-Thurgau and Pinot Gris varieties are cultivated for white wine. At Stein am Rhein – the westernmost tip of the lake – Swiss viticulture also has a fine reputation. This is where the Canton of Schaffhausen winegrowing region begins with 1236 acres of mostly Pinot Noir grapes that yield particularly fine wines.

A selection of recommended winegrowers around Lake Constance:

Alsace: A Destination For Wine Aficionados

Riesling – Alsace’s King of the Grapes