Probably you must have seen this image in our earlier blog articles or our website – the black and white image of an antique Mercedes van with some words written on it in German language across the top; so let’s dig into some historic moments which will help us in knowing story behind it. 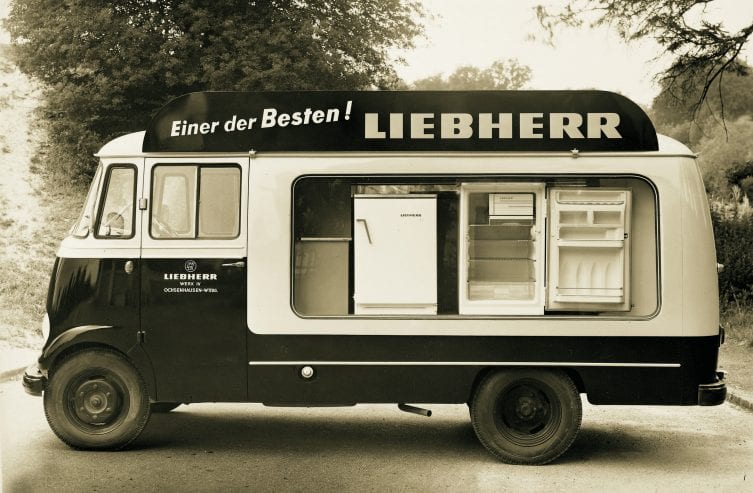 This is the story of the L 319 Liebherr bus that, in the early years of Liebherr Hausgeräte (Domestic Appliances), used to tour what was then known as the Federal Republic of Germany (West Germany) to promote the sale of our refrigerators and freezers. Known affectionately as ‘the Liebherr bus’ and our ‘mobile shop window’, it was a familiar sight as it travelled between Flensburg in the north of Germany and Oberstdorf in the south west.

When Hans Liebherr created the Domestic Appliances division in 1955, a converted Mercedes Benz L 319 commercial van became ‘the Liebherr bus’, and it turned out to be a very special advertising platform for this still burgeoning company. To start with, the bus was painted in resplendent black and yellow – the colours of Liebherr’s parent Cranes division – but later it underwent a makeover and emerged its familiar blue, the colour for the Domestic Appliances division. The Liebherr bus, along with a small fleet of Ford Taunus Transit-based vans had a mission: to introduce Liebherr refrigerators to the people. The bus and promotional vans regularly set out from Ochsenhausen (Baden-Württemberg) and toured throughout Germany.

From southern Germany right up to the far north 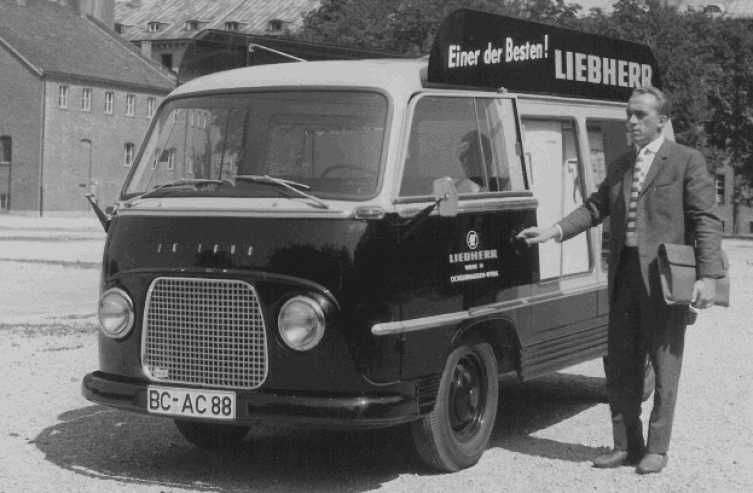 And so, the Liebherr bus and the small fleet of Ford Taunus Transits toured from the east to the west of fledging West Germany, from Ochsenhausen to Flensburg and back again; regularly venturing into the industrial Ruhr area and over to the border zone between the former East- and West-Germany near the Bavarian Forest. Together they brought Liebherr Domestic Appliances’ refrigerators and freezers to consumers throughout the country.

The Liebherr bus: was available upon request

Wholesalers were able to hire the Liebherr bus and promotional vans from the Ochsenhausen sales department, so that they could directly present the latest models to their customers. At that time, there weren’t yet any of the large electrical retailers with huge display areas that we see today, and Liebherr dealers were always looking for ways to forge contacts with customers.

Converting the L 319 into a ‘mobile shop window’ In order to optimise product presentation, the L 319 had to be extensively modified: special plinths were fitted within the carrying space to support the appliances and position them such that customers could get a clear good view of them; large glass windows were fitted on either side of the bus and at the rear, with fridges being displayed at each window; and signs were installed on either side at the top of the bus bearing the slogan “Einer der Besten! Liebherr” (“Only the best! Liebherr”).

The back of the bus was modified in such a way that the rear window offered the best overall view of the appliances The Liebherr bus strutted its stuff right up until 1968, clocking up many thousands of German kilometres introducing modern fridges and freezers to the people and raising Liebherr’s profile everywhere it went.

All good things come to an end and, after many successful years on the road, those vans retired from duty in 1968. At that time, no one had sentimental or nostalgic feelings towards them – after all, they were only work vans, and new and better work vans were coming out all the time – and little value was attached to preserving them for posterity.

The Liebherr bus survives in spirit However, Liebherr’s most iconic company vehicle still breathes life today: it lives on in old Liebherr advertising posters and its spirit has been perpetuated in a collector’s model. The Liebherr Shop offered a 1:50 scale model of the L 319.

Since then, the L 319 Liebherr bus has also appeared as a cake: at the launch of Liebherr social media activities in Asia in 2015, the historical bus was there to celebrate in the form of delicious iced sponge cake with marzipan. This ‘sweet return’ reiterated just how close to everyone’s hearts the bus clearly is, and again reminded us of Liebherr’s ‘mobile shop window’ era and of our humble beginnings.

View more pictures of the L 319 Liebherr bus in our gallery: 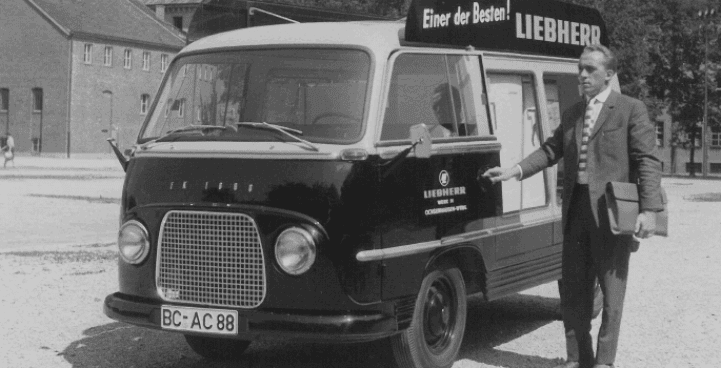 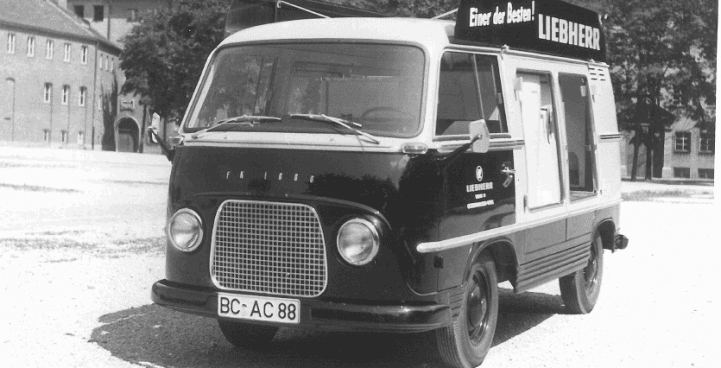 If you get to see any old pictures of our Liebherr bus from your friends or families members who were there in Germany during those times, please share with us by contacting us on : Email: [email protected]. It would be wonderful to hear from you!

We hope you enjoyed this post. If so, it would be great if you could recommend it to others by sharing it on the social networks Facebook. You can also subscribe to our newsletter so that you don’t miss interesting articles from Liebherr FreshMag!

From construction machinery to refrigerators: How Liebherr became a specialist in refrigeration and freezing

Why a Liebherr appliance is more than ‘just’ a fridge?

Have you ever spoken to your refrigerator?

6 THINGS TO CONSIDER WHEN PLANNING YOUR KITCHEN

WHY DO REFRIGERATORS HAVE HEATERS?