Everyone’s seen mouldy food. A once appetising morsel becomes entirely disgusting – decay has set in and it often doesn’t smell great either! But why does food go mouldy and how can we prevent it?

Although mould fungi don’t look anything like mushrooms or yeast, they actually belong to the same family. Several thousand species of mould fungi have so far been identified, and they are everywhere… in water, in the air and in the soil. They also thrive on almost all kinds of food, especially in warm, damp conditions.

Mould itself is not actually poisonous, but it does taste slightly musty when eaten. However, under certain conditions, metabolic products or fungal toxins known as ‘mycotoxins’ are formed, and these can be poisonous to both humans and animals. Known carcinogenic mycotoxins include aflatoxin B1 and ochratoxin A. Anyone who wants to avoid taking risks should, therefore, throw away mouldy food immediately. Neither should mouldy food be given to livestock or animals for fattening because the mycotoxins can cause illness. They can also become deposited in the animals’ fat or offal and, in this way, be introduced into our own systems when we eat them. Cold environments generally slow chemical and biological processes and so some foods should ideally be stored in the refrigerator. 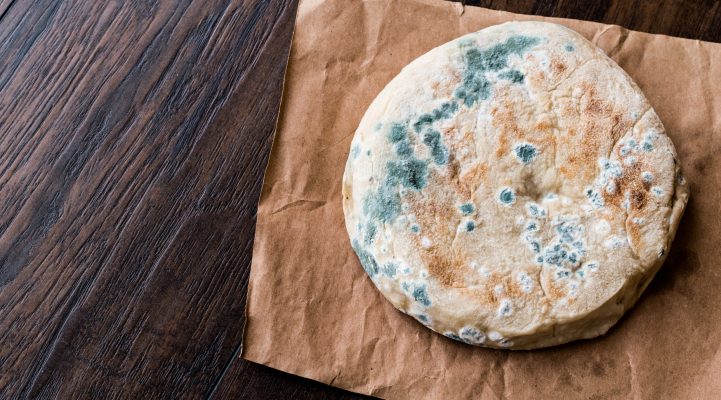 How does mould grow?

The coloured and visible part of mould is the fungus’s propagation workshop. The round spores (conidia) are spread in the air or transmitted by people. On finding a suitable substrate, the spores start to germinate and grow into the food. The tubular fungi then start to grow almost invisibly and then, after a few days, the spores move to the surface and the ‘mould’ becomes visible. That means that even if you remove the visible mould, the food is usually still contaminated. Mouldy food should, therefore, be thrown away completely.

How can we prevent mould?

Below is a list of measures you can take to protect food against mould for as long as possible:

• When purchasing food, ensure that it does not show any signs of mould in the first place. It’s easy to miss when you’re in a rush!
• Buy food that is susceptible to mould (food containing any kind of water or fluid is susceptible to mould growth) as and when you need it. Store in a cool, dry place as warm, damp conditions promote the growth of mould.
• Only buy fresh, unbruised fruit and vegetables, and store these appropriately.
• Only buy goods with undamaged packaging.
• Always take note of the best before date.
• Food that has been cut or ground should be wrapped and consumed quickly. Why? The large surface area means that the food comes into contact with a higher level of oxygen, which promotes mould formation.
• After purchasing fresh food, quickly store it in the refrigerator or a Liebherr BioFresh compartment where produce can last significantly
• Regularly clean utensils, the refrigerator and the bread bin (e.g. using diluted vinegar) and leave them to dry thoroughly.
• Containers that were used to store mouldy food should always be thoroughly cleaned.
• It is not easy to remove mould from porous containers made from wood or clay. If mould appears regularly in these, they
should be thrown away too.

Do you have any questions or comments? Then write to us! Use the comment function at the bottom of this post or start/join in discussions with us on Facebook.

The crispy goodness of iceberg lettuce